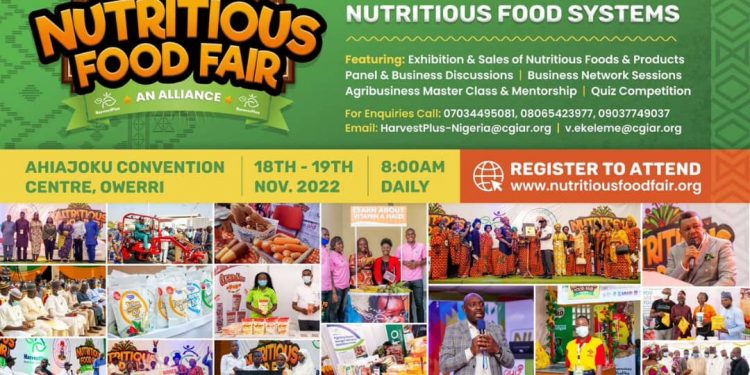 A non-governmental Organisation, Harvestplus in partnership with the Imo state government is set to host a two day food fair in the state.

Briefing newsmen in owerri, the country Manager of the HarvestPlus , Mr Yusuf Dollah disclosed that the event will take place on the 18th and 19th November at the Ahiajoku convention center Owerri.

According to him, the Nutritious food fair will encompasse training of participants on the benefits of biofortified crops and food that will enhance their body nutrients. He disclosed that the fair which is the 8th edition will provide a platform for practical training, Mentorship and job creation.

He further maintained that the HarvestPlus has created lots of employment since its inception and stated that the agency has also developed several crops and staple foods that contain micronutrients and vitamins.

Representing the Imo state government, the commissioner for Agriculture and Natural Resources, Dr Bathy Okorochukwu while addressing Newsmen disclosed that the theme of the event is “Improving Resilience through Nutritious food system”.

He noted also that the food fair will provide “an operational platform for collective engagement, learning and networking of actors in the nutritious food sector in Nigeria”.

Also speaking a veteran Nollywood actor, Mr. Francis Duru stated that this year’s fair will also feature Smart Mothers Initiative geared towards engaging mothers who are home builders who also determine the type of food to be taken at home, the programme will afford them the opportunity to know the right food to prepare at home that will supply the necessary nutrients needed by the body to function.

Also students both in the secondary and tertiary institutions will also benefit from the training on biofortified foods which will also enable them engage in already mapped out business model thereby making them self employed.

The programme Manager of commercialization of biofortified crops project, Mr Goodluck Ogu said the fair will address issues of hidden hunger and training of farmers across the state.

He maintained that the programme will make malnutrition will become a thing of the past.
He said, that the younger people will also take advantage of the business model to run biofortified products which will also bring about food self sufficiency.

Many Killed as Gunmen attack Police checkpoint in Anambra