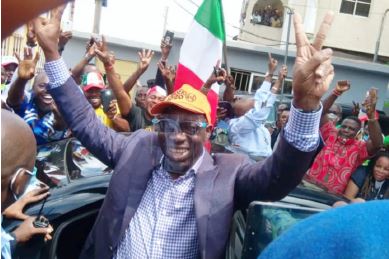 The NGO has identified that the pipes that connect Okigwe Water Scheme that generate water to residents were badly damaged so that water no longer circulate effectively there over the years, subjecting residents to danger and disease.

GHARF, during a courtesy visit to the member representing Okigwe State Constituency in the Imo State House of Assembly, Hon Chidiebere Ogbunikpa, at Okigwe, weekend, solicited his support to facilitate the prompt reactivation of Okigwe Water Scheme to restore portable water to the area by way of making a favourable legislation in the assembly.

Noting that it has “been implementing E- WASH programs on cleanliness and safety at Okigwe as men, women and youths were being sensitized on safety, sanitation and hygiene”, GHARF stated that marking has already been done by the Water Board on effective reactivation of Okigwe Water Scheme as the case at Orlu and Owerri.
Reacting, member for Okigwe State Constituency in the Imo State House of Assembly, Hon Chidiebere Ogbunikpa, assured the group of moving a motion in the Assembly to see whether water could be restored at Okigwe, adding that only the government has the financial strength to reactivate Okigwe Water Scheme.

Ogbunikpa promised to do his best to ensure there is regular and potable water to residents of Okigwe, maintaining that he built boreholes to his people in order to help them generate good water.

According to Ogbunikpa, “I started with the provision of water at five wards because Okigwe Water Scheme will take long before it will be reactivated. It is not a project an individual can finance alone. Okigwe can have separate wa

ter system which we have been doing. Besides, many residents access water from the stream. Open deification will also be difficult to stop especially at the rural areas”.