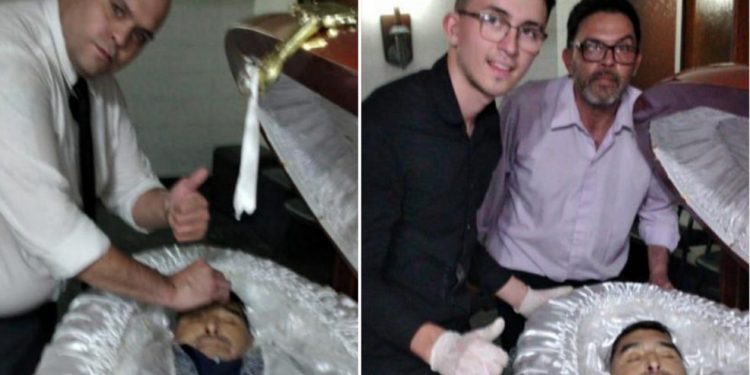 0
SHARES
994
VIEWS
Share on FacebookShare on TwitterShare on Linkedin

A funeral parlour worker who caused outrage by posing next to football legend Diego Maradona’s body handed himself into cops — after rumours spread that he had been murdered.

A picture of Diego Molina holding the body and giving a thumbs up went around the world.
He went into hiding after two other staff in Argentine capital Buenos Aires got death threats.

Authorities there are investigating “negligence” after claims an ambulance took an hour to reach the 60-year-old national footballing hero after a heart attack.

Meanwhile a senior virologist has lashed out at the President of Argentina for allowing huge crowds to gather as Maradona’s body lay in state.

Hordes of mourners lined the streets to pay their respects, many without masks sparking a potential new Covid wave.

Dr Arnaldo Casiro said: ”We have been saying constantly to the people to make sacrifices so we can try and have a Christmas and New Year, we tell them to maintain social distance and then we see the scenes we saw in the streets. It’s totally inconsistent with what we have said.

”Of course I was very upset by Maradona’s passing but knowing full well there would be such a massive movement of the people everything should have been organised in a better fashion so as to minimise risks.”

Do you believe without asking questions?

I had a good relationship with Ronaldo — Benitez

I had a good relationship with Ronaldo — Benitez

The Senate confirms its nuisance