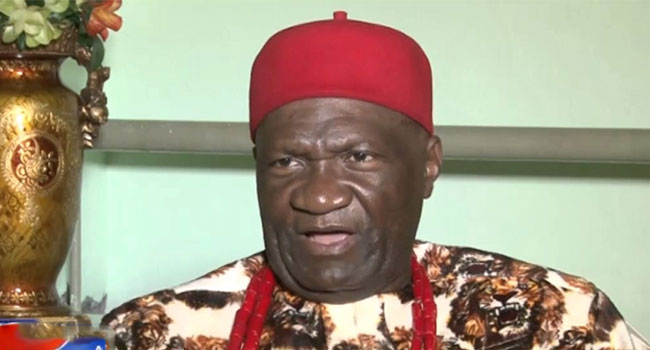 Fresh crisis has erupted in Ohanaeze Ndigbo as a split group has called for the arrest of the President General of the pan-Igbo group, Chief John Nwodo over an alleged illegality.

The recently set-up Ohanaeze Ndigbo General Assembly, led by Basil Onuorah, had said the Nwodo-led Ohanaeze Ndigbo, was operating illegally without registration and certification by law and should be disbanded and its leadership investigated.

A lawyer, Amobi Nzelu, on behalf of the new rival group, had petitioned the Secretary to the Government of the Federation, the National Security Adviser and the Economic and Financial Crimes Commission, alleging that the mainstream apex Igbo body was an illegal association and could not “transact any business,” including the proposed election.

But in an interview with Chukwuemeka Ezeife, the elderstatesman described the call for the arrest of the Ohanaeze boss as “arrant nonsense”
“While the group continues to fool themselves as a registered Ohanaeze Ndigbo, the people will continue to recognise the legitimate Ohanaeze Ndigbo”‘ he said.
According to the ex-governor of Anambra State, “This country allows freedom of association and you don’t have to register for freedom.

“Look at them all and tell me one reasonable Igbo man in that group. I think this party politics must stop in Nigeria. I understand that party politics is the reason for that splinter group”

Globalization And The English Language