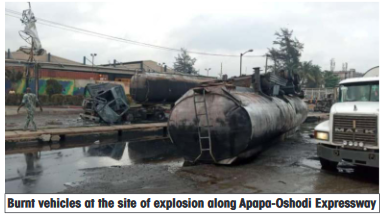 Tragedy struck in the early hours on Thursday, when a tanker loaded with Premium Motor Spirit, PMS, popularly called petrol, suddenly overturned while in the process of navigating through the dilapidated spot at LACASERA outwards Mile- 2 Oke, opposite Fatgbems Fuel Station, along Apapa -Oshodi Expressway.

The ill-fated fuel tanker subsequently, exploded into flames burning at least three other vehicles in the process. Fortunately, no loss of life was recorded in the inferno. At press time the fire had been finally put out while rescue team are on ground to remove burnt vehicles from the road.

According to Director-General of Lagos State Emergency Management Agency, Dr Femi Oke-Osanyintolu, the incident occurred at 1.am, Thursday. Oke-Osanyintolu explained; “The agency received distress calls concerning the above which occurred around 1a.m and activated its emergency response plan.

“On arrival, it was discovered that a fuel tanker loaded with PMS had overturned and burst into flames due to the oil spillage. This in turn affected some stationary trailers parked inwards Apapa.

“A combined team comprising Lagos Fire, Police, Federal Fire and agency responders have extinguished the flames. “Operation to remove the affected vehicles is ongoing while road users are encouraged to use alternative routes.”