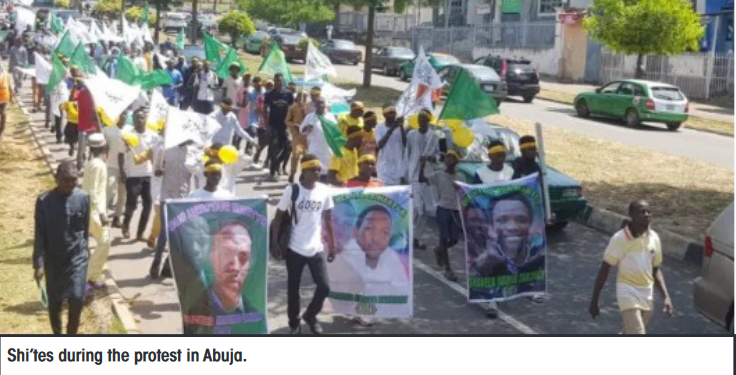 Members of the Islamic Movement in Nigeria, IMN, on Tuesday staged a mass protest over an allegedly offensive publication of Prophet Muhammad by a citizen of France.

The Shi’ites also burnt the national flag of the European country at the Wuse market area of the Federal Capital Territory, Abuja.

The angry protesters chanted religious phrases and songs, as they condemned the action of the French President, Emmanuel Macron amid protests in Paris after a sensitive cartoon of the Muslim prophet was published.

The sect members also demanded the release of their leader, Sheikh Ibraheem El-Zakzaky, and his wife, Zeenat, who are currently in prison custody. The youths paralyzed commercial activities for over an hour in the Wuse District of the FCT as traders who feared an escalation of their action locked up their shops and stayed away.

Our correspondent learned that the members of the sect gathered in large numbers at Nitel Junction, commenced the demonstration by 12:00 noon, and ended the march at Wuse Market by 1:10 pm, causing serious traffic gridlock along the way.

Though some policemen were sighted on the scene, they did not disperse the IMN youths by coercion. Explaining the rationale behind the rally, the Secretary of the Academic Forum of the movement, Abdullahi Musa, told Vanguard burning of the French national flag aimed at condemning the action of the French President over the derogatory publication.

He said, “Prophet Muhammad is a symbol of peace, unity, and humanity in general. Publishing his cartoon is a total disrespect and anti unity and global peace.

“So, we set the France Flag on fire in a reaction to the attack on Islam and Muslims by the President of France Emmanuel Macron since the heinous crime of publishing cartoons of the Prophet by the magazine Charlie Hebdo.

“We also applaud the current campaign against the actions of the French President by Muslims across the world and all lovers of peace and humanity.”

Recall that the Federal Capital Territory Administration had last week deployed anti-riot policemen and water canons to the National Mosque in anticipation of a protest by members of IMN.