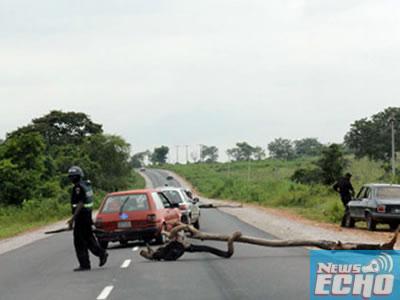 Two groups of fake task force who have been extorting money from arrested environmental defaulters in Umuahia have been dismantled in the capital city by officials of Abia State ministry of environment.

The fake officials were discovered at Azikwe by Aba roads and BCA by Ikot Ekpene road junction respectively in Umuahia by the ministry personnel, led by Mr Godson Agharanya.

Addressing Journalists in Umuahia after September clean up exercise, Agharanya, who is the Director of Operations and Pollution control in ministry of environment who represented the Commissioner in the ministry, Barr Sam Nwogu, warned that the full weight of the law would be visited on any fake agent masquerading as genuine officials.

The Director expressed surprise that individuals would hide under the name of his ministry to perpetuate crime. “This morning, I was at BCA junction by Ikot Ekpene road. I had to dismantle a road block mounted by touts. I told them who told you to be here? I therefore dismantled the road block.” Agharanya continued, “Sometime ago I was at Azikwe road by Aba road where they arrested one of your correspondents and I came there and destroyed the road block. It is going on but we won’t allow it anymore.”

He expressed disappointment that traders at Isi gate and Orie Ugba markets as well as some motor parks who have continued to carry out their businesses during clean up hours, despite government’s repeated radio announcements. They equally advised Abians against dumping their refuse in gutters as doing so would block drainage systems and in turn, cause destructive flooding.

When News Echo visited the ministry of environment headquarters at school road off Ikot Ekpene road in Umuahia arrested environmental offenders were seen being tried mobile Courts with. Many of the arrested offenders were convicted and ordered to pay fines while some others were either released on health considerations or after presenting their identity cards. Other offenders were also ordered to openly clean the environment as punishment.

No harassment on road users in Ebonyi - SA on transport