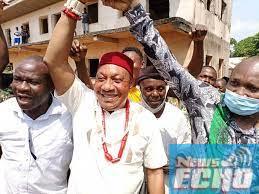 He said when electricity, good road network, good market environments, functional and accessible healthcare services, quality and affordable education including harnessing agriculture by giving incentives to farmers to strengthen farming are prioritized and put in place poverty, hunger and violence will reduce minimally at the agrarian communities. Alua, who made the urge in an interview with journalists at Umukane-Ukwu during the Iri Ji Ohaji held last week, highlighted that Ohaji has much, but gets less from the government, appealing to government to do the needful to advance good living and security.

“Government should give us as we are giving them, because the level of development in Ohaji is low, not okay at all. We are not getting much. We have rich rubber plantation, palm plantation and natural resources through which Imo State and Nigeria feed, but we get less, we lack social amenities like electricity, good road, pipe bone water, working healthcare, quality education with dilapidated structures, bad markets and sordid environments, joblessness among other deficiencies. These anomalies give room to crime, restiveness, agitation and insecurity at the area”.

He implored the Imo State Government being led by Governor Hope Uzodimma to give him Crown of Office to enable him do wonders, saying he is mainly, deeply concerned at uniting and galvanizing his people to live godly and enrich themselves so that peace, conviviality, cordiality and progress would continue to reign at Umukane-Ukwu, adding that God called him to be Eze to liberate his people.

“The call to be Eze (monarch) humbled me. God called me to liberate my people, to bring justice, peace and development to them and make them successful and happy. All I have been doing is to actualise the things God called me to do. The most important thing in life is for you to have quality relationship with God, people and family. I’m in to keep good legacy so that people will always remember me for being nice. My father, Chief Samuel Alua, a visionary, christened Ohaji, because we were formerly known as Ohoba Court Area”.

The Umukane-Ukwu Eze-elect recounted that the Iri Ji Ohaji is a worthy cultural festival which brings the people together to chart positive ways forward, hailing the ISOPADEC MD, Charles Orie, his cousin, and others for organizing the ceremony which he recommended should be sustained”.

Parents have you held a hoe before?