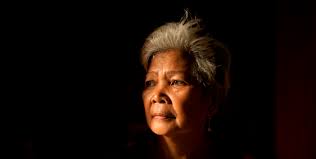 Former Minister of Women Affairs, Hon. Josephine Aneni has decried the increasing neglect and abuse of elderly people in the society.
Aneni stated this in an interview with News Echo at Umuode Autonomous Community in Nkanu East Local Government Area of Enugu State shortly after the event marking the monitoring and evaluation of Seenagers’ Association, organised by DewDrop and Center for Gender Economy, CGE and sponsored by Oxfam Voice in 11 communities within the state.

Aneni who noted that the growing negative attitude towards old people affects them psychologically for which many would prefer to die than to live, lauded Oxfam Voice Nigeria project for its action plans to combat discrimination and abuse against old people.
Her words: “You will never know what ageing is, until you attain the age, join hand in curtailing older people’s abuse now that you are young.

“I am here to attend the closing ceremony of a very worthy project that is so dear to my heart. And that is the Seenagers’ Association supported by Oxfam, Dewdrop, CGE, and Daughter of Divine Love Foundation, DDF. They have been here for about 18 months and today is like an assessment. Oxfam-Voice is here, Dewdrop, and others to access the project that they carried out.

“I advocate for healthy and graceful ageing. I also told the younger people not to discriminate against older people. One thing elderly people experience is isolation and discrimination and a lot of disrespect. Even though, in our society, we say we respect age but we find out that they respect age if you are well-to-do.

“If you are not well-to-do and you are old, you automatically become a witch, a nuisance and become someone nobody wants to deal with. The isolation of elderly persons affects them psychologically. A lot of old people will become depressed and be asking for death to take them”, She said.

Also speaking, the Executive Director of Dewdrop Foundation, Mrs. Agatha Nnaji, said that the project was to bring the older people together to allow them have voice and sense of belonging.
She assured that the project would be expanded to other communities in the South East zone soon, as older people were found in every community.

According to her, “The situation we found on the ground is that elderly people end up being accused. A lot of times not deliberately, sometimes, they are left behind and because they are getting older, they are becoming difficult to deal with and some of the family members get frustrated. And it leads to depression among the older people.

“What we are doing here is to get the older people together under a platform that we called ‘Seenagers’ Association’, meaning senior teenagers to allow them feel about themselves. When they come together, they will be able to discuss issues that is happening around them and they will understand that issues happening to one person are also happening to all of them”

The erstwhile minister called on all governments, groups, NGOs and all leaders to establish Seenagers’ Association in their communities to help people grow old and have their rights respected.
Earlier at the event, the Programme Coordinator of Oxfam-Voice, Nigeria, Barr. Ijeoma Okwor, commended Dewdrop, CGE, DDF for utilizing the fund meant for project properly, assuring continuous partnership with them.

“Ageing is a blessing and taking care of older people is everybody’s responsibility. We thank you for using the money given to you for this project judiciously. I will report back to my organisation with hope that the project will expand to other communities”, she said.
One of the elders, Mr. Onovo Livinus, who expressed gratitude to the organization, prayed God to bless Dewdrop Foundation and their partners.