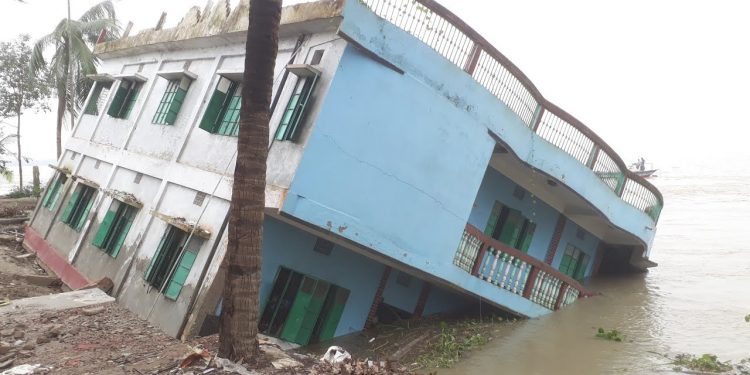 The inhabitants were seen abandoning their houses to seek shelter elsewhere and escape from the natural disaster, which has destroyed schools and churches.

It was gathered that the gully erosion was caused by inability of the government to dredge Ekoli River, which was fast eating up the community and submerging house on its way.

An affected resident Awo keme, said he was traumatized because he had lost his home to erosion and he currently had no place to stay.

The residents called on the federal and state governments to come to their rescue and save them from the threat of erosion.

Speaking with newsmen, the Ebenibe of Epie/Atissa clan, His Royal Majesty, M, King Godwin Igodo, and former Chairman of Bayelsa traditional council said, he is not surprised at what is happening, because it’s a yearly thing.

He said, “We are not surprised at the natural occurrence, we live at the bank of the Ekoli River and the place is always affected by seasonal flood. Every year, from June to October, this ugly incident continues.

Right now, our primary school is seriously affected. We have lost the NYSC Lodge to erosion. The NYSC lodge that was very far from the bank of the river is now at the bank, basically eroded.

“Some of these environmental problems are natural while some are man-made. Our own is natural, it has been there, and we have written to the Federal Government and interventionist agencies to come to our aid, but nothing has been done”’