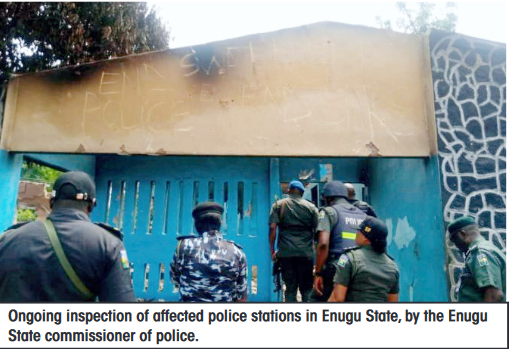 Enugu state government has commenced reconstructions of damaged infrastructure in the capital city, after the destruction that befell the state during the EndSARS protest.

No less than 2 police officers and 5 civilians reportedly died during the three days of violent protests in the coal city. 241 bus shelters, almost all the traffic lights, iconic statues such as Otigba, pedestrian safety barrier meshes, banks were looted and destroyed. Two police stations with 2 operational Hilux vans and 4 police posts were also burnt down.

Hoodlums on October 21 hijacked the protest and torched the newly-built Nigeria Immigration Service office complex at Emene and stole its office equipment.

The University of Nigeria, Enugu Campus security house was vandalised, same as banks, ATM galleries and business premises in the state capital. The State Police command arrested 23 suspects for their alleged roles in the violence, recovered 13 machetes, a bag containing 36 mobile phones, some materials suspected to be charms, an iron with the shape of a gun and N26, 175 cash from the suspects.

The State government under Governor Ifeanyi Ugwuanyi has however commenced rebuilding the destroyed coal city, starting with fresh constructions of 194 bus shelters through the Enugu Capital Territory Development Authority, ECTDA in the first round of the rebuild.

Chairman of ECTDA, Denge Josef Onoh said “It is painful for us at ECTDA to quantify the pain we feel for the amount of time, dedication, commitment and creativity that was put into the provision of these facilities as we watched the things we gave our lives for the love our city, broken.

We will stoop to build them up again with nothing except the will and love for the coal city that beacons on us to carry on. “Most appreciation goes to His Excellency, Governor Ifeanyi Ugwuanyi and his security aides, the state commissioner of Police who collectively prevented more destruction in the city.

The carnage has fallen on the Governor who in his peaceful nature has taken full responsibility and initiated the rebuild of Enugu capital territory.

It’s painful for the Governor to see what he has worked for destroyed, yet he has not lost hope in a peaceful resolution of the state.” Onoh, however, noted that compared to the larger issues facing the entire Nigerians, the state prays and shares in the pains and agitations, that he said, are greater than what were destroyed. “Replacing these public properties comes at a heavy cost but life is precious and irreplaceable, though rebuilding our nation is even harder.

We stand with our fellow Nigerians,” he said. The agency said it appreciates organizations, groups and individuals for their support and contributions through the donation of trucks, machines, money, fuel, labour and other kinds of support in cleaning the city after the rampage. “These are exceptional gentlemen, and pride of the coal city, a grateful city and your city salutes you.

“ECTDA wishes to assure the good residents of the capital territory that the agency will put all efforts to replace all affected bus shelters, barrier mesh, damaged sculptures, traffic lights, etc, within a reasonable time.

We thank you all for your immense support, while our thoughts and prayers go out to all those affected negatively by the outcome of the unrest,” Onoh said.

He appreciated the Divisional police officer of Abakaliki road police station GRA Enugu, CPS Adamu Garba, whom he said staked his life in harm’s way during the #Endsars protest and saved the Park Avenue pedestrian barriers from vandalism.