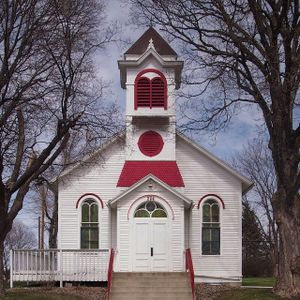 Scores of worshippers of the Methodist Church of Nigeria, Agbani Diocese of Enugu State, on Monday protested against demolition of its property including Manse, worth over N300 million at Ugbawka Community, Nkanu East Local Government Area of the state by some villagers.

The Methodist Church faithful also alleged that the villagers were also threatening the life of the Minister of God in the community, calling on the state government to protect God’s servants from any harm from the villagers who felt that they could fight God because they have money and connection in government.

The protesters who were mainly priests from all the parishes in Agbani Methodist Diocese, with handful of church members were led by the Bishop, Rt. Rev, Dr. Udo Nmeregini. Some of the placards carried by the protesters read: “This is God’s property. Stop destroying Methodist property.

This is God’s battle! The Church is for Peace. Who are you to fight God?” among others, marched around the church compound and destroyed Manse.

Speaking shortly after the protests, the Bishop, Nmeregini, regretted how people could wake up one morning, went and bulldozed the church Manse even when the Minister of God was inside the house, and destroyed cash crops belonging to the church that worth millions of Naira no matter what.

Bishop Nmeregini explained that the land was given to the church by the community over a decade ago by the forefathers of the Community, adding that the church doesn’t acquired it by forces. He wondered why some young men of Isigwe Ugbawka Community could take such a dangerous mission to fight God and his messengers.

His words: “Just about six years ago somebody who felt he is now bigger than God came in and said he is taking over this church Land; that it belongs to his grandfather and father. And the church said no you didn’t give us the land that God gave us the land through the leaders of this Community over hundred years ago.

“In short the late traditional ruler championed the demarcation and ceding of this Land to the church and is in writing. We have documents in respect of this Land. It is a communal land they gave to us and other early churches; and it was not only Methodist alone. “How come now you want to twist our hand and take it away from us. It is not acceptable.

“That is why we are here to say this is God’s property. We are only caretakers, even as the bishop I am not the owner of the Land. It belongs to the Methodist Church. I am here as a pastor, my job is itinerary, today I am here tomorrow I will go and the land remain the property of Methodist Church Nigeria. “We are saying that the land belongs to the church and Isigwe Ugbawka people are the custodian of the land.

The priest here is an indigene of this land,” he said. Speaking on court matter the church had with some members of the community, the clergyman said, “Some people took the church to court. The Court of first instance gave them judgment and said they should take part of the land that is not up to two plots and the church has appealed against the decision of the court.

We are not aware of Orashi River Port – FG