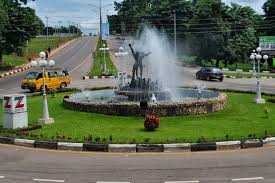 The Deputy Inspector-General of Police in-charge of Department of ICT and the supervisory DIG of South East geo-political zone, DIG Celestine Okoye, has disclosed that Enugu State is very calm and peaceful.

DIG Okoye, who made the disclosure when he visited Governor Ifeanyi Ugwuanyi at the Government House, Enugu, appealed to youths of the state to continue to embrace peace, urging them not to allow “miscreants destroy what your fathers and forefathers worked and suffered for”.

The Police DIG revealed that those who caused mayhem in Enugu were not from the state.
He, therefore, charged Enugu youths to keep their eyes open and ensure that miscreants do not cause further mayhem in the state.
While asking parents to advise their wards to desist from acts of violence and criminality, as “Enugu is very calm”, the DIG who was accompanied by the State Commissioner of Police, CP Ahmad Abdurrahman, further appealed to residents of the state to remain peaceful and law-abiding.

In his words: “I am proud of this state (Enugu). Enugu State has made me proud and happy. The reason is that as I entered Enugu we hovered around and I realized that the state is very calm.
“I am also happy that the youth of Enugu State rose; His Excellency called them and they answered immediately. So I call on the rest of our people that they should listen and let’s move forward.

“If you are approaching a police station with the intention to set it ablaze, your arson is known and the punishment is known. You cannot carry a gun and you are approaching somebody that is holding gun now and he just allows you to kill him. It is not possible; he must defend himself.

“So please be very peaceful. I am begging everybody. We know we are all Igbos and we have our own pride. Let us hold our heads high, so that we don’t end up destroying what we have long built and suffered for. May God bless Enugu State.”

Peter Obi‘ll not last if he wins, he‘ll be impeached – Reno Omokri