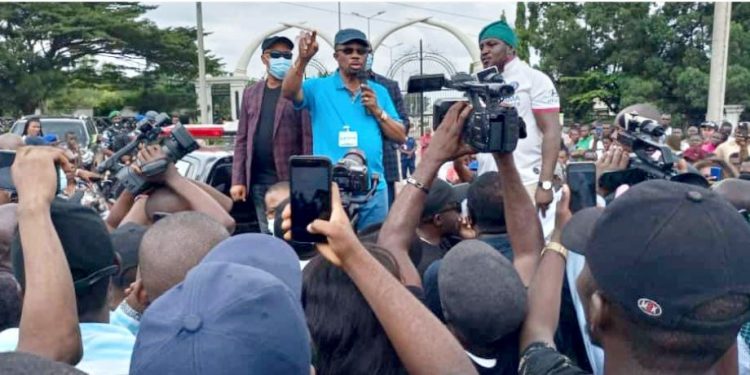 The Anambra state Governor, Chief Willie Obiano has announced that the former OC SARS in Awkuzu, Mr. James Nwafor will be relieved of his political appointment and recommended for immediate prosecution, including other SARS officials who have abused their offices.

The governor also assured the protesters numbering over one thousand and blocking the Enugu-Onitsha expressway in front of government house that all detainees will also be released.

Governor Obiano who disclosed this on Thursday, October 15, while addressing the #ENDSARS protesters at the Government House, Awka said that effective tomorrow, all illegal detainees in various SARS formations in the state will be released, while officers found wanting will be prosecuted.

Okoye Emeka, one of the protesters jibberishly stated “Oga Governor dey talk for himself, until we see Awkuzu SARS open, my brother dey here”

Meanwhile, Gov. Obiano equally addressed other issues raised by the protesters, asking them to open up the expressway which has been blocked for easy movement.