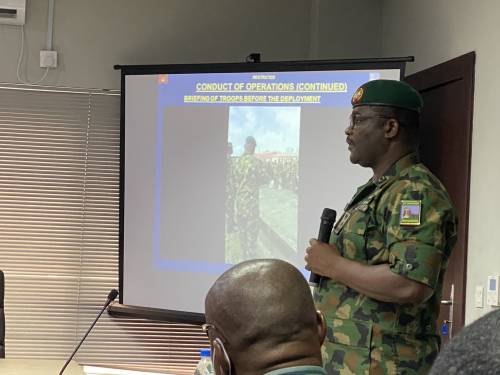 He said the trainee soldiers were deployed for the exercise due to shortage of troops.

This was part of Taiwo’s revelations on Saturday, November 14, 2020, when he appeared to testify before the Lagos Judicial Panel of Inquiry.

The Lagos State Government had set up the panel during the crisis to probe the alleged shooting of peaceful protesters on Tuesday, October 20, 2020, at Lekki tollgate and to look into police brutality cases in the state.

While testifying before the panel on Saturday, Taiwo said, “The 81 Division was short of troops, the Chief of Army Staff gave an extraordinary order that all Army schools should be shut down and everybody should be brought to the operation.”

A day before the trainee soldiers were drafted to enforce the curfew imposed by the Lagos State Government, the military officer said he had incidentally taught the young soldiers about internal security techniques.

He said he also reminded them on the operation day how it was unbelievable that only a day after learning the techniques, they were going for an operation in internal security.

Nigeria can no longer take Ndigbo for granted – Chekwas Okorie