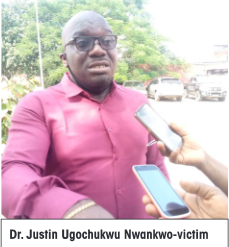 Dr. Justin Ugochukwu Nwankwo ,one of the petitioners at the ongoing Anambra State Judical Panel of Inquiry on Police Brutality, Extra Judiciary killings and Other Related Matters sitting in Awka, Anambra State capital, said while in Awkuzu SARS detention for 81 days his scrotum was damaged.

Nwankwo who was a manager at Upper class hotel Onitsha and currently a lecturer at Okoh Poly said he was brutally tortured to near death at Awkuzu SARS under the supervision of CSP James Nwafor.

According to him, he was heavily tortured to force him implicate the owners of the hotel that there were kidnapping activities in the hotel.

“When you hear that my scrotum was damaged, my hair pulled and was hanged, it was to force me to implicate the owner of the hotel that the place was for kidnapping den”

“At the time of torture, my scrotum was damaged and many injuries were inflicted on me. Look at the scars on my forehead, my face, and head, all these were suffered while in Awkuza SARS detention.

“If you see my back you could see scars as result of torture with electric iron by the Awkuzu SARS led by James Nwafor.

“They go for my scrotum to force me say what did not happened. They even write my statment and force me to thumbprint. In between the torture one must intermittently fell unconscious and they will pour buckets of water on you

“Honestly, I received the highest torture because they wanted me to be prosecution witness to the owner of the hotel. There was so much torture for me to accept that there were kidnapping activities at the hotel which was not true

“I was tortued, incarcerated and almost killed by Awkuzu SARS. To the glory of God I survived and even till today police has not brought any formal charges against us. We were arrested detained for 81 days without any charge. This is why I approached the panel for the world to know that after 81 days in SARS detention and seven years after, we have not gotten any charge, police apology or government as to what happened at upper class hotel Onitsha in 2013.

“I seek for my name to be cleared because by the time the incident happened we were tagged Otokoto in Onitsha.

“We are asking the panel to set us free from the police and government to pay us compensation for the damages inflicted on us by Awkuzu SARS” he said.

He also inisted that on the day of the incident somebody lodged in the hotel room with his name, with which the manifest was submitted to Police and CID department.

He said the room 102 where corpses were found somebody paid for it and somebody lodged, saying that to the best of his knowledge nobody in the hotel brought in any corpse.

“By the time the police came around 8am the lodger had left and person name somebody Obi had been earlier submitted to them.

“The first injury I got from Awkuzu SARS was my insistence that somebody lodged in the room 102 and that the name of the lodger was forwarded to police and CID.
“It was not a standard practice that hoteliers will search guests in hotel rooms” he said. According to him, majority of the people who normally lodge in the hotel were traders because the hotel was located inside market.
“The worst, the hotel was demolished the same day they arrested us . So the police started and concluded the investigation of the case in a day and the government ordered for the demolition of the hotel the same day. In the same day, the police investigated the case , took the case to court and got judgment and order was executed same day..

“The former governor of Anambra state government Mr. Peter Obi said there was security report on the hotel and we have been asking him to make report public. When you arrested us, you should have left the hotel and do the investigation and allow the court to give order for demolition. The hotel was demolished without any space for us to pick our belongings

“What is most painful is that, a man taken to detention is presumed to be innocent by law. I was reported as Otokoto. Is that not enough torture as a PhD student? On the day of my arrest I received four buckets of water” he concluded