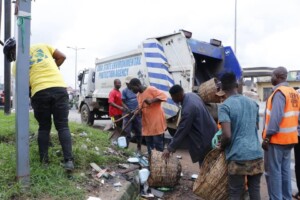 Hundreds of Abia State youths on Tuesday turned out en masse to clean up major streets in Umuahia, the capital city, after the End SARS protest which was eventually hijacked and resulted in the destruction of government infrastructure and private properties.

According to reports, the clean-up exercise which started from School Road took the youths through major streets in Umuahia including Aba Road, Azikiwe Road, Isi Gate and its environs.
Addressing the youths during the exercise, Chief of Staff to the Governor, Dr Anthony Agbazuere said the exercise was necessitated by the need to clean up the streets following the unfortunate hijack of the protests by hoodlums who turned violent, littered parts of the State and destroyed properties.

He commended the youths for coming out to participate in the exercise and assured them that the government had heard their demands and was working to attend to them.
Some of the youths interviewed after the exercise including the Chairman, National Youth Council of Nigeria, Ikwuano Chapter, Comrade Chinweuba Anyaram, a leader in NANS, Comrade Ndom Chibuzo among others, said they are happy to mobilize to clean up the environment.

They expressed their displeasure at the destruction of private and public facilities, stating that the destructions were done by hoodlums.
They also called on their fellow youths to desist from destroying public and private facilities.