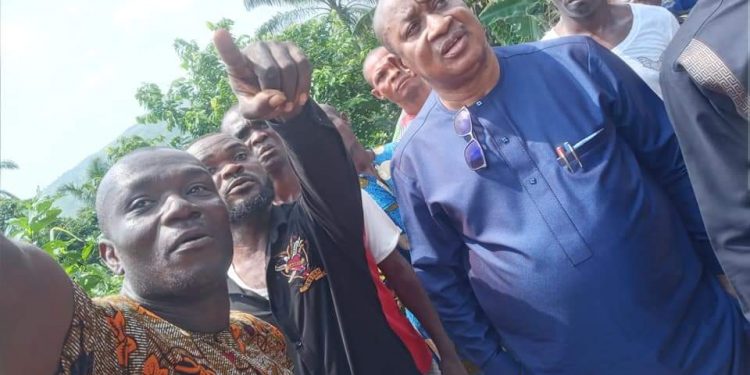 The Senator representing Ebonyi South Senatorial district Senator Michael Ama Nnachi, has cried out over a Landslide in Ogwuma Edda in Umunna community of Afikpo South LGA of Ebonyi State.

Sen Nnachi who raised the issue when he visited the scene described the havoc caused by the slide to the affected area as a disaster.

He donated N 2 million naria to the victims promising to channel the reports to relevant federal agencies like NEMA, and the Ecological fund for intervention.

He explained that the slide which as affected more than ten buildings has led the collapse of one of the motorable roads connecting the upper Edda.

“This is a disaster, it has never happened in Edda history, it has taken over 9 houses and it’s still happening, it’s a terrible thing that even the local government cannot handle it alone.

“It’s a project that must be sent across to the ecological fund to come in, the best I can do is to take the report there for the federal government to come in, then report to NEMA that we have homeless people here for them to provide succour”, he said.

The village head of Ogwuma Edda, Chief Paul Ogbo and Youth Leader Mr Nnachi Inya, while commending Sen Nnachi for the visit and donation however lamented the devastating effects of the landslide that occurred in the area which led to the displacement of over 200 natives and affected more ten houses. According to them, normal and agrarian life in the community has been discomforting since the incident took place.

They further made passionate appeal for state and federal government, as well as well meaning Nigerians to come to their aid as the incident has rendered them homeless.

“This landslide happened without notice, we are calling the government and none governmental organizations to come to our aid because we are homeless, more than ten buildings have collapsed”.

Ending the elongated ASUU Strike: FG needs to be genuine

Plot to attack journalists; traditional rulers will cause Imo pains-Prophet