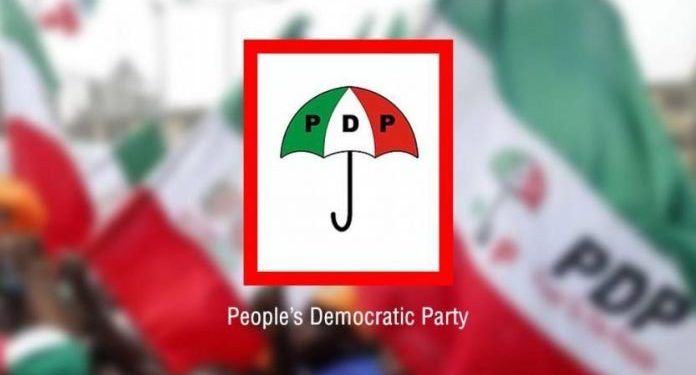 The crisis rocking the Ebonyi state chapter of the People’s democratic party (PDP) following the defection of the Governor, Dave Umahi, to the All Progressives party (APC) has deepened with the party describing as a ruse the purported suspension former governor Sam Egwu and other members of the party by the Onyekachi Nwebonyi-led dissolved state executives committee.

The chapter decried the action as unacceptable more so as it was officially dissolved on November 17 by the National Working Committee of the party, saying that Nwebonyi is an agent of APC out to destroy PDP in Ebonyi.

Nwebonyi had set up a caretaker committee and appointed Hon Fred Udeogu as the chairman.
Nwebonyi in reaction, had addressed a Press conference asserting that the NWC lacked powers to suspend them, maintaining that he and his State Executive Committee were still in charge of the Party in the State.

Nwebonyi went ahead to put up radio announcements suspending some staunch Stakeholders of the Party in the State, including Senator Sam Egwu, Obinna Ogbaa, Michael Nnachi and many others for anti-party activities.

The statement reiterated the commitment of the stakeholders in rebuilding the Party in the State.
The Statement reads, “All genuine members of our dear Party, the PDP in Ebonyi State are hereby advised to disregard the announcement being made on radio alleging that some critical stakeholders of the PDP in Ebonyi State have been suspended from the Party.

“Further take notice that the erstwhile Barr Onyekachi Nwebonyi led state working committee of PDP in Ebonyi state was validly and legally dissolved by the national working committee on Tuesday, the 17th day of November, 2020 from which date they ceased to be officers of the PDP,

“Be further informed that the purported letter of suspension was written on Wednesday the 18th of November, 2020 at Osborne hotel Abakaliki, but criminally backdated to be 13th November, 2020 as several Ward chairman of PDP who were invited to be a part of the criminal plot refused to participate in it,

“That His Excellency Dr Sam Egwu and all PDP members in the national Assembly as well as the members of the PDP caretaker committee of Ebonyi state remain faithful and dedicated members of our party.