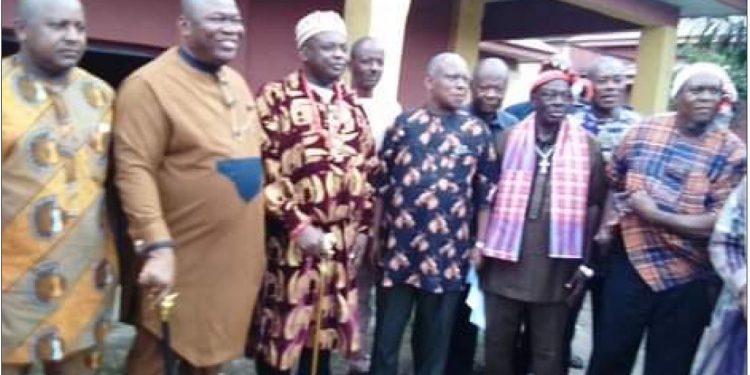 0
SHARES
69
VIEWS
Share on FacebookShare on TwitterShare on Linkedin

The new monarch, who was recently elected, was led to the council headquarters by his people to perform the semi final lap of his electoral process, which will be followed by the issuance of staff of office by the Abia State government.

They drummed and sang in lamentation, claiming that the Eze-elect was not their choice as according to them, the process that produced him as their Eze was not transparent.

Some of the placards read “we don’t have an Eze yet, don’t recognise him yet, is this how to become Eze, among other write-ups on the placards.

But the drama took another dimension when the supporters of Chief Vincent Nwankwo increased their own drumming in order to drown those from their opponents.

This is even as traditional gun salutes were fired by the Eze-elects’ supporters to the cheering of those who want him on the throne.

In his address while receiving the Eze-elect, the T.C chairman congratulated him over his emergence and urged him to rule with the fear of God and to consolidate on the existing achievements, reminding him that traditional institutions is the closest government to the people.

Reacting to Akabuike ‘s address, the Eze-elect promised to rule with the fear of God and to sustain peace and stability which his community is known for, while promising to reward his people’s confidence in him with transformational leadership.