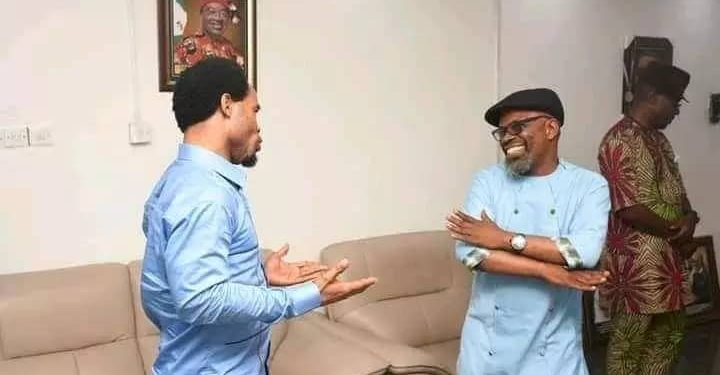 Umuahia, the capital of Abia State was in frenzy on Thursday as controversial Onitsha-based pastor, Chukwemeka Ohanyerem, popularly known as Odumeje stormed the major streets of the town, throwing money to his admirers.

The Pastor ,whose convoy elicited a wild celebration among the admirers, was dressed in a simple blue long sleeve shirt with a white trousers during the visit and arrived the State through the Popular Abia Tower junction, off Enugu-Aba-PortHarcourt road in Umuahia.

At Tower junction, Odumeje entertained his supporters by throwing huge wraps of cash in the air, making people to fall over one another in grabbing the largesse.

He then rode into the main city, standing waving to people with his right hand while using his left hand to hold money.

Odumeje later passed through the Okpara square before heading to the Abia State Government where another drama ensued, with security men on duty refusing to allow his convoy into the Government House because of the intimidating convoy of expensive cars accompanying him.

But unknown to the security personnel, Odumeje had an appointment with Dr Anthony Agbazuere, the Chief of Staff to Abia State Governor, Okezie Ikpeazu.

Agbazuere later received Odumeje inside his office with many staff of Government House Umuahia queuing along to catch a glimpse of the popular but controversial clergy.

Speaking on his visit, the Pastor said he was in Abia on special visit describing the visit as a sign of good things to happen in Abia State while his host, Dr Agbazuere thanked him for the visit.

But the street show continued when Odumeje left the Government , heading into Bank road from where he stormed the popular Orie Ugba market off Bende road and then made a detour to Isi gate area where another round of money sharing started.

What is the value of government?