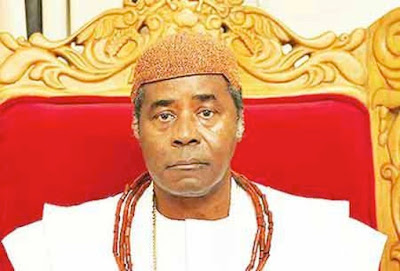 The Warri Traditional Council of Chiefs has formally announced the passing unto glory of His Majesty, Ogiame Ikenwoli, the Olu of Warri.
The pronouncement was made on Monday by Chief Atserunleghe said that in accordance with the Itsekiri customs and traditions, the high chief symbolically performed the breaking of three earthen (native) pots containing white native chalks, one after the other on the floor at the royal precincts.

Palace sources told our correspondent that he exclaimed “Alejefun-ooooh”, after each pot was broken, which was accompanied by twenty (20) cannon shots.
According to the palace sources, the twenty cannon shots signified that twenty Olus that had reigned over Iwere (Itsekiri) land so far, of which the departed Olu Ikenwoli was the twentieth.

At the end of the traditional rites, Chief Atserunleghe announced Tsola Emiko as the Olu-designate, which was accompanied by wild ovation from Itsekiri sons and daughters present at the event. He said the Itsekiri people would be in a mourning mood in the next three months till the burial rite of the monarch is concluded.

“All Itsekiri adults both male and female will put their clothes upside down throughout this period of mourning. “No party, no drumming or merriment of any sort in Itsekiri land, until the burial is over and new Olu Installed,” he had said.

Corpse of youth discovered beside dustbin in Umuahia