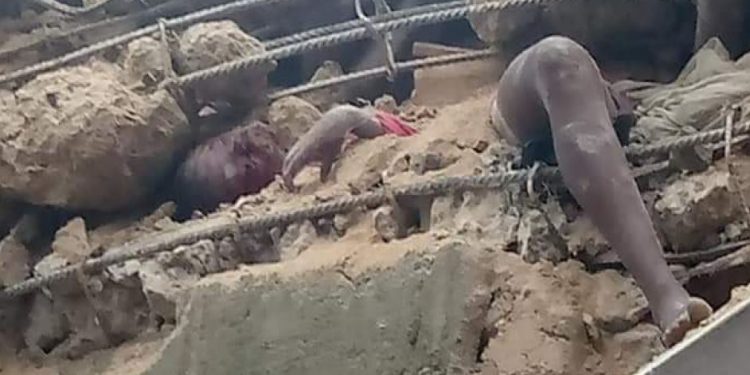 One of the discovered victims of Aba building collaps

As at evening of last Wednesday 2020, three persons have been confirmed dead while one person has been rescued alive from the debris of a collapsed building in Aba, Abia State.

The ill-fated three-storey building at 85 Azikiwe road, still under construction, caved in at during early hours of Wednesday, trapping unspecified number of victims under it.

The three fatalities recovered from the site so far, according to Chief John Okiyi, the Abia State Commissioner for Information, were two females and one male, while another victim was brought out alive. Meanwhile, Governor Okezie Ikpeazu has ordered the Abia State Police Command to nab the contractor of the building, Mr Emmanuel Ohaka and ensure his prosecution, together with the site Engineer, Mr Bassey Afokwalam who is already in custody.

The Governor equally expressed sadness at the needless loss of lives caused by illegal development of buildings without the approval of relevant government agencies.

He also directed security agencies to ensure adequate security around the building while rescue operations continued.

This is even as the executive secretary of Aba South Town Planning Authority, Mr Ahuruonye Okezie denied issuing any approval for the construction of the collapsed house, claiming that the builder did not receive the nod of his office before commencing job.

However, many residents of the Enyimba city who spoke to News Echo about the tragedy blamed it on the use of poor materials for buildings as well as engagement of quacks, who parade themselves as ‘engineers’.

Getting Rid Of Political Corruption in Washington DC – The Way to Clean House In Government?