Biafra: We have Aburi Accord tapes, Gowon lied against Ojukwu – Nnamdi Kanu 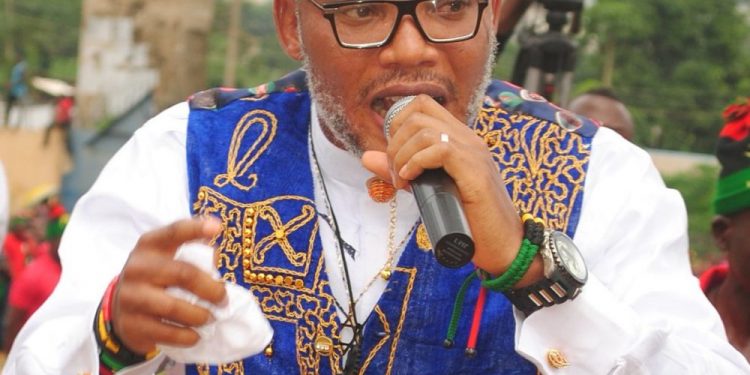 Nnamdi Kanu, leader of the outlawed Indigenous People of Biafra, IPOB, on Tuesday, disclosed that his group was in possession of the original Aburi Accord tapes.
Aburi Accord was reached in 1967 at a meeting attended by delegates of both the Federal Government of Nigeria (the Supreme Military Council) and the Eastern delegates, led by the Eastern Region’s leader Colonel Ojukwu. The meeting was billed to be the last chance of preventing all out war. It was held between 4 and 5 January 1967.

Kanu made the disclosure while noting that former Nigeria Military Head of State, Yakubu Gowon and Britain are in trouble.
He vowed to expose the alleged lies told against former warlord, the late Chukwuemeka Ojukwu regarding the defunct Biafra.

In a statement he issued, the IPOB leader said Gowon, Nigerian and British governments are about to receive the biggest shock ever.
According to Kanu: “The divinely-ordained noble family of the Indigenous People of Biafra (IPOB) is now in possession of the original Aburi Accord tapes.
“Yakubu Gowon, Fulani Oligarchy and the British Government are all in touble. Our eternal leader Dim Chukwuemeka Odimegwu Ojukwu and Biafra is about to be vindicated before the world.

“All the lies concocted against Ojukwu and Biafra by the BBC and world media is about to be blown out of the water.
“A very massive earthquake is coming. Britain, Gowon, Nigeria and the media is about to receive the greatest shock of their lives. Nigeria is finished!”
kanu has been in the forefront for the secession of Nigeria.

Despite being arrested and prosecuted, the IPOB leader was able to elope to the United Kingdom, UK, where he has been pushing for the actualisation of Biafra.

Nigeria: tackling poverty or hounding hawkers off the streets?