Best move by the youth 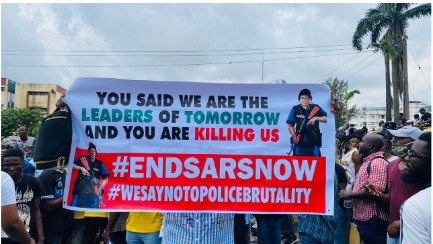 The popular and influential Google search machine vividly reported how the EndSARS protest was carried out. According to it: The Special Anti-Robbery Squad (SARS) was a branch of the Nigeria Police Force under the State Criminal Investigation and Intelligence Department (SCIID).

It was founded in late 1992 as one of the 14 units in the Force Criminal Investigation and Intelligence Department, which was established to detain, investigate, and prosecute people involved in crimes like armed robbery, kidnapping, and other violent crimes. The squad was created as a masked police unit to perform undercover operations against violent crimes like armed robbery, car snatching, kidnapping, cattle rustling and the bearing and use of illegal firearms.

In 2017, Nigerian activists, youth and celebrities across the nation took to the streets in a peaceful protest to spread awareness of SARS brutality and extortions and to demand its disbanding. The protests also moved to social media using the hash tag #EndSARS.

A 2016 report by Amnesty International indicted SARS maintaining that the squad was responsible for human rights abuses, cruelty, degrading treatment of Nigerians in their custody, and other widespread torture.

Some of the human rights abuses by SARS include the shooting of their detainees in the leg, mock executions and threats of execution, hanging and physical assault. A 2020 publication by the organisation documented 82 cases of abuses and extra judicial killings by SARS between January 2017 and May 2020.

In 2016, a human rights activist, Segun Awosanya popularly known as Segalink started EndSARS campaign on Twitter prompting police authority to announce reform of the police unit but nothing was achieved at the time In 2018, Nigerian rapper Michael Ugochukwu Stephens professionally known Ruggedman joined the campaign to end police brutality by releasing a single titled, Is Police Your Friend? In 2017, a petition signed by 10,195 people was submitted to Nigeria’s National Assembly calling for a total disbandment of SARS.

A few Senators backed the call for total disbandment of the unit. Consideration was given to reforming the force, rather than full disbandment due to the number of cases falling.

Not only were there campaigners in Nigeria utilizing the hash tag and having protests but they were also done in London and some parts of America recognizing this situation as a global event.

Lekki Massacre
On Saturday 3 October 2020, a video showing a SARS police officer shooting a young Nigerian in front of Westland Hotel, Ughelli, Delta State trended on the Internet. It was alleged that the police officers took away the young man’s vehicle – a Lexus SUV.

Sleek was said to be sitting in front of a hotel with a friend when the SARS officers approached them, prompting them to flee. According to an eyewitness, the SARS men pursued the pair, shouting “thief”, before shooting Sleek as they ran through a supermarket. His friend was arrested.

On Thursday 8 October 2020, nationwide protests on ENDSARS started after weeks of outrage and anger with videos and pictures showing police brutality, harassment and extortion in Nigeria.

The protests were led predominantly by young Nigerians in different cities alongside many activists and celebrities.

The Nigeria Police Force disrupted the protests in some cities, throwing teargas, using water cannons and shooting at unarmed peaceful protesters as seen in Abuja and Osun.

This led to the death of Jimoh Isiaq in Ogbomoso, Oyo State. By Wednesday, 14 October 2020, the End SARS protests were still on-going with young people in different parts of Nigeria intensifying their calls for reforms and accountability in police operations.

Five demands
On Sunday, 11 October 2020, the protestors made a list of five demands to be met by the Federal Government of Nigeria.

The demands which were signed by ‘A Nigerian Youth’ demanded for the immediate release of all arrested during the protests as well as justice and compensation for all who died through police brutality in Nigeria.

They also demanded that an independent body be set up within 10 days to investigate and prosecute all reports of police misconduct.

The protestors also asked for the psychological evaluation and retraining of SARS operatives before they are deployed to any other police unit. Lastly, they asked for adequate increase in the salaries for officers of the Nigerian police.

Nigerian Government’s response
In response to the public outcry on police brutality, the Inspector-General of Nigeria Police banned the FSARS, Special Tactical Squad (STS), Intelligence Response Team (IRT), Anti-Cultism Squad and other tactical units from mounting of roadblocks, checkpoints, stop-and-search and other routine and patrols.

Similar bans had been announced multiple times over the previous four years, causing citizens of Nigeria to question whether the bans would actually be upheld. There were further reports of SARS officers involved in killings across the country.

As this was the fourth time that the Nigerian government had announced a similar ban on SARS activity protesters insisted that the notorious police unit be entirely disbanded and wide-ranging reform of the force to follow.