Army arrests suspects over vandalization of ATM machine in Aba 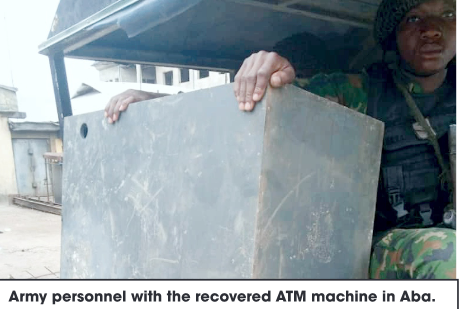 Hoodlums Who Attacked a First bank ATM machhe at Aba, during the EndSARS protests have been apprehended by troops of the 144 battalion in Aba.
The hoodlums who are currently under the custody of the police made positive confessions and pleaded for mercy.

Recall that police brutality fuelled a nationwide protest tagged EndSARS, which started on the October 19 and later hijacked by hoodlums who saw it as an opportunity to loot the innocent citizens.

The military in its professionalism and proactive approach, swung into action across the state which brought normalcy, averted the destruction of federal and state infrastructure within Abia State and led to the recovery of ATM boxes that were carted away from the bank.
Our preliminary investigation revealed that the criminal suspects broke into several industrial establishments, shops and also vandalized several cars of innocent citizens/residents of Aba and its environs to steal various parts of the car.