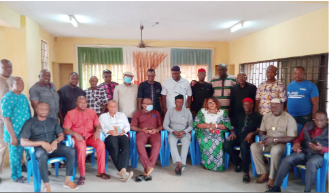 Members of the newly inaugurated Caretaker Committee of the All Progressives Congress (APC),Anambra State,Wednesday

The Anambra State Chapter of the All Progressives Congress (APC) has inaugurated state caretaker committee members to pilot the affairs of the party for a period of six-months.

News Echo gathered that the inauguration was done by the state Chairman APC Caretaker Committee, Sir Basil Ejidike, at the party secretariat along in Awka, on Wednesday.

Addressing members of the committee, Ejidike urged them to justify the confidence repose in them by working towards repositioning the party in the state.

He said the party under the National Caretaker Committee headed by Gov. Mai Mala Buni has initiating various measures aimed at its reposition for greatness.

He commended leaders of the party in the state for their continued support for the party and prayed for cooperation of all to achieve the task of getting APC into Anambra State Government House come 2021.
He maintained that there are more works to do in order to win the forthcoming Anambra election.