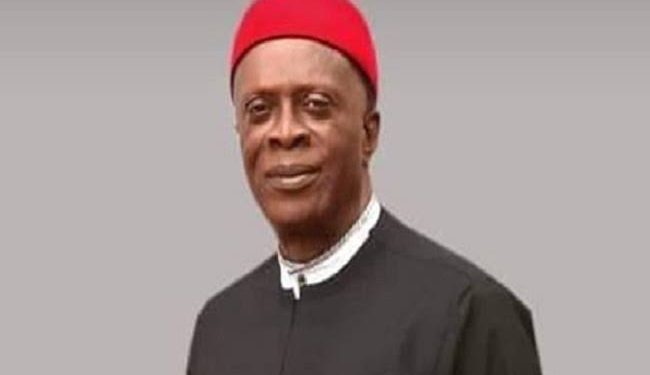 …ask for forgiveness to those offended

Chairman of the Anambra State chapter of the All Progressives Congress, APC, Chief Basil Ejidike has urged Igbos to be of a united mind having benefited immensely from the party’s leadership of the nation.

Ejidike stated this during to journalists at the state party secretariat in Awka as he equally noted that the party deserves support from Igbo people as a way to reciprocate their support.

He also said the party in Anambra has strategised on ways of ensuring maximum victory for the party’s presidential candidate, Asiwaju Bola Tinubu, and that part of it was the recent reconciliation among party leaders.
He said: “Let me start by congratulating our party’s flag bearer, Asiwaju Bola Tinubu and his running mate, Alhaji Kashim Shettima. They represent what you can call a round peg in a round hole. They are people who have been tried, tested and who we can conveniently trust.

“We have restrategized about how we can give them victory in Anambra State, and that includes the fence mending measures we have taken.

We may have had our share of internal crisis, but today we are more united, prosperous and solid. I want to use this opportunity to apologize publicly to anyone who has been offended in our party to please forgive us and let’s move ahead.

“We have a mandate to deliver our party’s candidate. We must come together and do that as Igbo people. The truth is that there is no way you can compare the 16 years of PDP in Nigeria with the eight years of APC.

“Igbo have benefited so much and the party has laid solid foundation, and the evidences are there.

The second Niger bridge is up and almost ready for commissioning. There is the once moribund Onitsha wharf, there is also the Awka-Enugu road, and the Enugu International Airport which received upgrade under APC.”

Ejidike appealed to Igbo to avoid sectional politics, saying Ndigbo were known for mainstem politics, which he said was bequeathed them by their political forbears.

“It is only when you are inside the house that you can make contribution. APC in Anambra is now more united. With our support, APC will be delivered to continue the good work it is doing in the country,” he concluded

Van Dijk back at Liverpool as knee injury recovery steps up