After one day in office: Uzodimma travels to Abuja, yet again! 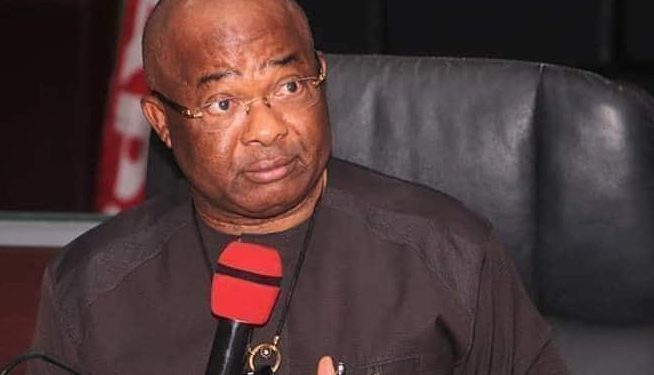 0
SHARES
177
VIEWS
Share on FacebookShare on TwitterShare on Linkedin

After attending official matters just for 24 hours on Monday as he ﬂew in from Abuja having stayed in the Federal Capital Territory for ﬁve days, Imo State governor, Senator Hope Uzodimma ﬂew back to FCT on Tuesday in a chartered ﬂight.

It was gathered by our reporter that in the month of August alone, Uzodimma travelled to Abuja four times, an average of once a week.

Shortly after lockdown when the pandemic was relaxed, Uzodimma travelled to Abuja on several occasions leaving oﬃcial matters unattended to. Put together, investigation revealed that Uzodimma has spent more time in Abuja than he has really allotted to oﬃcial matters, minus the severe Corona virus pandemic era. Also, another investigation conducted revealed that about N15m is usually spent each time the governor makes any trip to Abuja and back. This includes, chattered ﬂight cost as well as other logistics.

In fact, even before the pandemic, Uzodimma was very frequent to Abuja and also accompanied President Muhamadu Buhari to an AU conference in Addis Asaba.

Ogubundu Nwadike who is the publicity secretary of Imo State PDP in an earlier post had called on the governor to sit down in the oﬃce to work. He noted that it was while the governor was away that thugs believed to be working for the state government ﬂogged pensioners who were making a constitutional demand of their payments.

The PDP publicist equally advised Uzodimma to face governance and leave politics till electioneering time. He reminded the governor on issues concerning bad roads which he said was worse this period, insecurity, workers and pensioners unpaid salaries.

Since assumption of oﬃce the reactions of Imolites does not support the frequent trips of the governor who some has labeled as Abuja based governor. In a comment, one female teacher who gave her name as Peace queried why the man is always travelling and gave that as reason why salaries are not paid.
According to her, “it is like the man goes there to spend our money, no wonder he tells us diﬀerent stories on why we are not paid. Are you journalists comfortable about it, why are you people silent?”

In defence, the director general, Imo APC media centre, Comrade Cajetan Duke Akuta, observed that “Governor Uzodimma has the interest of Imo masses at heart. He goes to Abuja for the beneﬁt of Imo State not for himself. He is not the only governor who travels to Abuja for oﬃcial and state matters. And the reward of his trips have been numerous and this is why many roads are being tarred, institutions renovated, agriculture and commerce and other sections are also taken care of”.