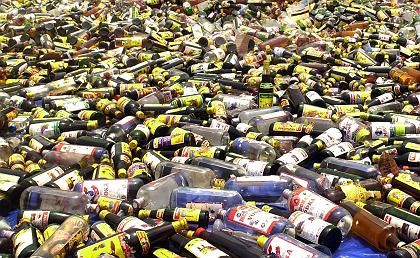 Local government workers destroy bottles of alcohol in a pre-Ramadan anti-alcohol campaign, Tuesday, Nov. 9, 2004, in Jakarta, Indonesia. Every Ramadan the government conducts raids at unlicensed liquor stores and then destroys the liquor in a pubic display. During Ramadan, observant Muslims refrain from eating, drinking, smoking and sex from dawn to dusk. (AP Photo/Irwin Fedriansyah)

A human rights activist , Mr Gabe Uzokwe has taken a swipe at the Governor of Kano State, Alhaji Abdulahi Ganduje for the destruction of confiscated alcoholic drinks in Kano State which was carried out by the State’s local police, Hisbah.

The activist made the remark on Monday in Umuahia in his reaction to the development , which he said was worth over N200 m.

He described the Kano State Governor as an economic saboteur to Nigeria and a hypocrite, arguing that the destruction was a religious war waged in disguise as according to Uzokwe, the destroyed goods belonged to Christian business men.

The activist called for a slash in the monthly federal allocation to the State which he said, the brewery sector contributed immensely to.

His wards, ” It is disheartening to see that a Governor whose State collects a bigger allocation from the federal allocation will wage a war against the brewery sector who pay big taxes to the federal government.

Are we operating a different constitution in this country? Where is the Inspector General of Police in this matter and why has he maintains silence as people’s businesses were crushed by Governor Abdulahi Ganduje”

Uzokwe continued “This is a religious war in disguise as the action of Ganduje is a threat to the unity and economic survival of Nigeria. The reasons given by the Kano State Hisbah does not hold water.

I call on the Inspector General of Police and the Arewa Consultative Assembly to call their son, Ganduje to order. They should also tell him to compensate the owners of the destroyed goods ”
He compared Governor Ganduje with former Governor of Zamfara , Alhaji Sani Yerima who instituted Sharia legal system in his State.