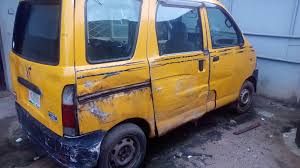 Abia State Board of internal revenue has confirmed the introduction of online ticketing system for operators of tricycle popularly known as Keke Napep.

The revenue agency in a statement signed by the acting director general, Mr Celestine Agbara in Umuahia on Friday, said that mini bus drivers, known as Keke bus, have also migrated to the new payment regime.
The Abia BIR said the online payment service which started on 17th October for Keke riders, also commenced on November 2nd for mini bus drivers.

The agency threatened to prosecute any operator who patronised manual ticket, warning that such a person would be treated as economic saboteur while pointing out that transporters would benefit from the new form of payment which would save them from paying into unlicensed revenue collectors.

Similarly, the BIR has warned the owners of sealed shops in the State against attempts to reopen such shops until they obtained clearance from relevant government agencies.

The BIR in the statement on Friday said it had uncovered plans by some people whose shops were sealed for various revenue offences, to reopen their shops without the approval of the State governments.
It vowed to prosecute any shop owner caught in the act.

OCDA is no longer market for thugs – Ikpamezie