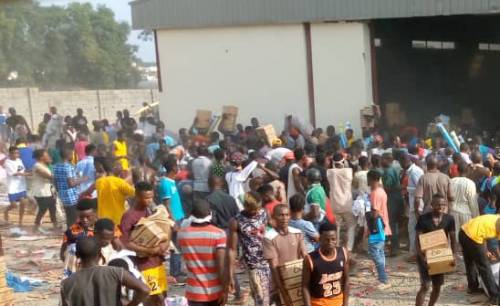 At least eight people met their death in a stampede on Tuesday at Inksmarket centre along Rumuodara axis of Port Harcourt.

Our correspondent gathered that the incident occurred when hundreds of person from three Local Government Areas of Ikwerre, Obio/Akpor and Emohua had gathered to collect palliatives from Inksmarket, a Port Harcourt-based online marketer.

Eye witnesses said hundreds of the online registered customers had gathered at the collection centre to collect palliatives from the company.

The eye witness said that the number of persons that had gathered to collect the palliatives over stretched the center’s facilities a situation that lead to the stampede.
The State Police Command Public Relation Officer, Nnmadi Omoni confirmed the incident.

Omoni said that the incident occurred when palliatives were being distributed by INKSMARKET, a Non-Governmental Organisation to its registered members from Ikwerre, Emohua and Obio/Akpor Local Government Areas, when suddenly there was a stampede leading to the death of eight people.

He also confirmed that some persons sustained various degrees of injuries and are currently receiving treatment at a hospital, adding that the situation was under control.

The police spokesman said that the command has instituted immediate probe into the unfortunate incident with a view to ascertaining the circumstances and bringing those found culpable to justice.