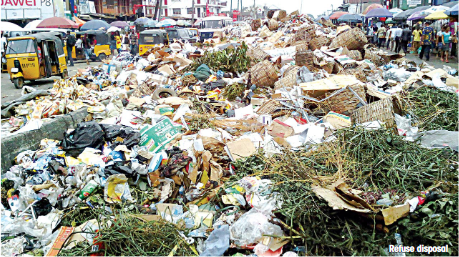 Refuse disposal is one of the days to day activities of residents of any community or city. Before now in Imo State, where to dispose refuse was not an issue of great concern for residents of the state.

What was rather an issue of concern was the heaps of un-evacuated refuse found in different parts of the state, which is as a result of failure of the agency whose duty it is to evacuate them as and when due.

Successive governments in the state had adopted different strategies in refuse disposal. The government which projected environmental cleanliness as its main priority was the government of Sir Ikedi Ohakim, which had as its main agenda and slogan; “Clean and Green”.

The known and easiest way of refuse disposal has been the use of buckets. The buckets are kept in strategic places within neighbourhoods where people easily go to dispose their waste.

The norm in places where refuse disposal and cleanliness are given priority attention had always been for officials of the agency concerned to lift the buckets with cranes and cart away the refuse at intervals, when they were expected to be filled.

The big buckets are built in a way that they are lifted by a crane bearing truck and disposed at the designated pit.

Meanwhile the present administration seemed not to favour the above method of refuse disposal which has become conventional in the state and presumably most parts of the world.

ISWMA has come up with its own preferred method of refuse disposal, which does not focus on usage of buckets at strategic places across the city. It has imbibed the idea of going from street to street on days to collect the refuse from residents.

In these areas, all the refuse disposal points have been sealed off with the buckets no longer available. People living around the areas, now find it an extremely herculean task to dispose their waste products. They trek very long distances, looking for where to dispose refuse, as all former refuse disposal points have been sealed with no alternative provided.

The officials of Imo State waste management agency who came up with the idea of going from street to street and home to home, to collect the refuse are hardly seen. And instead of creating room for a descent environment, devoid of indiscriminate littering of wastes, the reverse has become the case, as people now sneak out early in the morning or late in the night to dump their refuse any place available for them.

People now wonder the advantage of the new arrangement over the old one and have concluded that the new arrangement is only but a lazy escape by the government and its agencies which are running away from their responsibility. They say all that was needed in the old arrangement was to provide enough of the buckets, the big, medium and small and distribute them, in line with the need of different areas. The next will be for the officials to maintain a regular evacuation, either on daily, weekly or biweekly basis, depending on the frequency at which they get filled.
That is a very stress-free method for the people, and I think for a well-meaning government. That was the method used by the clean and green government of Ikedi Ohakim, that made Imo emerge, at some point, as the cleanest state in the federation.

It was also the method used by Emeka Ihedioha when his government had stabilized, and the state witnessed stabilized refuse disposal machinery. But to say officials of the waste management agency will be going from street to street and house to house to collect the refuse, is an elitist idea that was dead on arrival.

The government and its agencies lack the capacity to maintain the idea, so let us stop deceiving ourselves. This has also put the people into untold stress and inconvenience, using the areas mentioned above as case study.

We therefore advise Imo State Government to reconsider its method of refuse disposal, revert to the old but efficient order, whereby it could use the already provided equipment and buy new ones as the need may be. Alternatively, they can fashion out an arrangement that works better than what we have now.