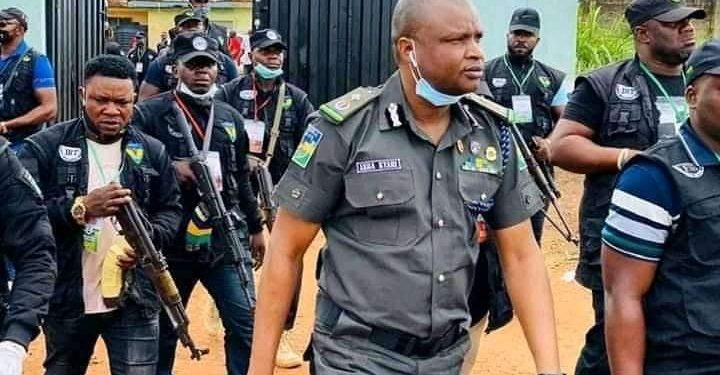 The other day, this column talked about how unfitting it was for a policeman to preach to Nigerians and point accusing fingers at other institutions. The analogy was that if every other person complains about the cost of dry cleaning clothes, it should not be a bedwetter who should be remorseful for having a wardrobe full of stink. Today, one can say that the diviner hasn’t even finished packing his opele when his prediction comes true.

On Monday, purportedly suspended Deputy Commissioner of Police, Abba Kyari, who was already under investigation for alleged links with international fraudster Ramon Abass, a.k.a. Hushpuppi, was accused of attempting to sell cocaine seized from some drug dealers.

Does the Ogun State Police Public Relations Officer, Deputy Superintendent of Police Abimbola Oyeyemi, now see why he stands in no good place to advise Nigeria’s youth or accuse a self-motivated industry like Nollywood or even the church of the rot that is sweeping decency out of the country? If he doesn’t, we should let him know that his superior, who was also the head of the Intelligence Response Team at the Force Intelligence Bureau, may just have demonstrated that policemen are as desperate to make money as the youths Oyeyemi preached at recently.

And here, there can be arguments about rogue police officers being part of the system across the world, such that condemning the entire Nigerian Police Force may be unfair. This argument may in fact have some credit. It is, however, clear that the extant case is not just about one police officer. It is about a rogue institution, which has lost perspective and sense of decency.

For instance, shortly after the National Drug Law Enforcement Agency declared Kyari wanted on Monday, the Force Public Relations Officer, Chief Superintendent of Police, Muyiwa Adejobi, issued a statement, assumedly meant to defend the police and splash mud on the NDLEA, apparently in retaliation of how the latter had exposed Kyari earlier that day. It is safe to assume that this statement was in solidarity with Kyari because the NDLEA did not even make a feeble attempt to drag the police as an institution into the issue at hand.

Anyhow, the statement admitted that four police officers had been arrested in connection with the alleged crime. Adejobi then went on to tell Nigerians that this was not just about men of the police but officers of the NDLEA as well. You are then forced to wonder whether these people even understand these issues?

How do you reduce an important issue like the betrayal of the trust of Nigerians by policemen to some trashy interagency rivalry between the police and the NDLEA? Not even a deliberate attempt to dent the image of the police by the NDLEA should have warranted such pettiness. What one sees from the statement is the police and the NDLEA dragging bragging rights as to which one of them has the most reprobate officers?

There are yet more reasons for the police hierarchy to cover its eyes in shame concerning this matter. By its own admittance in the press release on Monday, Kyari, who was suspended in August 2021, was part of the operations of the IRT five months later!

How would a police force that wants to be taken seriously and perceived as being on top of its job not even know this? What does this say about the capacity of the police to effectively protect the lives and property of Nigerians when a man who is being punished and investigated for criminal offences remains in control of such an important squad?

Worst of it all is the impunity and disrespect with which these public officers treat Nigerians. So, a police officer is under international investigation for crimes, yet he goes about gallivanting at social events and showing off elaborate images from the same. Not just that, he had the temerity to attend the wedding of the Inspector General of Police’s son and make a public show of it! Such audacity reveals the level of compromise and indiscipline within the police and how much that would affect effectiveness.

It also indicates that the police and its men hold Nigerians in absolute disdain, not caring what they say or feel about anything. If not so, Kyari would neither have been invited to this event nor have the gumption to attend even if he was invited in error. But Nigerians, whose sweat pay the salaries of these men and fund their activities are largely inconsequential in their estimation. The danger in such behaviour is that it further erodes people’s trust in a police force that is already thought to be governed by no other ethics than the desire for lucre.

Now, there are very few things that are worse than an unaccountable police force, where seniority is indulgent and contempt for the people is rife. Kyari’s ubiquitous display at the wedding of the first policeman in the country is, if you like, tacit approval of his larger-than-life image and showmanship and a sign of the level of permissiveness in the force. It is not clear whether the upper echelon of the police is aware of stories on the streets about the pervasive corruption wherein proceeds from roadblocks mounted by policemen are sometimes shared with their bosses. Such distrust of the police grows even more after events like the IGP’s son’s wedding and Monday’s press statement.

All said and done though, society cannot be exonerated from complicity in the eyesore that the Nigerian police and, literally, every institution in the country has become.
The first problem with Nigeria is the unbridled worship of money and warped perception of success, which pushes people into all sorts of desperate situations. Leaders of the country encourage this because most of the people who work hard in Nigeria do not earn living wages and the country has no cushion that provides the essentials of life for its citizenry. It is doubtful that any uncaring society would have sanity.

American psychologist Abraham Maslow helped the world with his theory of motivation and the attendant hierarchy of needs. Though it does so in no absolute terms, this theory suggests that the physiological (basic or lower) needs of men—which include water, food, shelter and warmth—take priority over their psychological or esteem needs. The truth is that what has turned a lot of Nigerians into cheap criminals is the failure of the state to assure about their present and ensure their future. This is more so with law enforcement agencies with access to arms, ammunition and uniforms issued by the state. Leaders of the country must do more to build the confidence of Nigerian institutions whose conduct can tell foreigners all they want to know about the country and affect the lives of citizens.

Attention must be paid to everything that affects such institutions. Some of these include the police, immigration, customs, and the judiciary. A country needs its best people in all these areas as well as in many more.

How does Nigeria recruit people into its police force, which, rather than curbing crime, has become infested with compromises that negate the essence of its survival? How does the country recruit people into its immigration and customs, under whose watch at least 42 million litres of petrol are said to be smuggled out of Nigeria daily? What is the process of selecting people who go into the judiciary? Does this process consider the capacity of nominees or pander to political considerations? How much do we do to ensure that every Nigerian gets justice and is seen to get justice?
With these individual and institutional failings, we are slowly destroying a beautiful country and leaving a legacy of chaos, which only urgent efforts at making the people feel more loved and a deliberate revival of our moral and ethical values can reverse!