Hightime we learned from the Rwanda 94 genocide 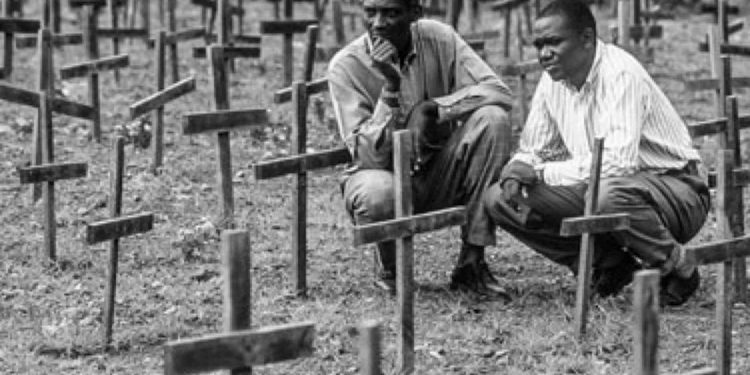 The 1994 Rwanda genocide is a sad lesson to countries wishing to toe the path of ethnicity and racism.The pains of the 1994 genocide in Rwanda were relived sometime in 2018 when it was reported that four mass graves were discovered traced to the genocide in the East African country dating back to over 20 years.

According to reports by British Broadcasting Corporation (BBC), more than 200 bodies were disinterred from the sites, which were found in the the Gasabo district near the Rwandan capital of Kigali.

The report further stated that the exercise was ongoing as others were yet to be exhumed. It is reported that an approximate 3,000 residents of the district were missing following massacres that occurred during the 1994 genocide, when some 800,000 people, mostly members of the Tutsi ethnic minority, were killed by ethnic majority Hutu militias over 100 days and local residents in Gasabo believe the mass graves could contain all of the missing victims’ bodies.

The discoveries then raised fresh concerns over how long the sites were known to the locals as the sites were reportedly identified by the residents. Another worrisome issue was that many of those convicted of perpetrating atrocities during the genocide are released, but they have done little to reveal the whereabouts of the missing persons.

The Rwanda 1994 genocide, which is regarded as the greatest tragedy in the country, is a very sad reminder and should by all means be jettisoned to the dustbin of history. On April 6, 1994, the plane carrying President Habyarimana and President Cyprien Ntariyamira of Burundi was shot down by rocket- fire. The masterminds of this assassination was not known but the assassination served as the fuse that erupted the violence.

Before Jack could be spelt, and even before the national radio had announced the assassination, death lists were circulated to as the identification of the Hutu opponents. This was basically targeted at those who supported the democratic movement or promoted human rights.

Those assassinated were several ministers on the transition government, which included members of the democratic opposition such as Prime Minister Agathe Uwilingiyima. When the killings were extended, it dawned on the world that the killings were an approach to eliminate every single Tutsi, though Hutu intellectulas and opponents were involved.

As no other means could provide an adequate identification of the Tutsis, the identity cards demanded at road blocks mounted by the militias served as the signature on the death warrants for the Tutsis.

Not satisfied with the results from the road blocks, the militia leaders partitioned the territory under their control so that one man was allocated for every ten households to enable them conduct a thorough search for Tutsis in their immediate localities. The incident degenerated to the point that every Tutsi family could be denounced by someone who knew the family personally: giving rise to teachers killing their pupils, customers killing shop owners, neighbours killing their neighbours, and husbands killing their wives to spare them experiencing a more terrible death.

The incident degenerated to the point that churches where the Tutsis have gone to seek refuge were invaded by the militias. The church scenes even constituted the worst massacres. For example 2800 murders were recorded in Kibungo; 6000 in Cyahinda, and 4000 in Kibeho.

Marriage links neither provided a succour as children of mixed marriages take the ethnic group of their father. Though some Hutu killers-including the militia-had Tutsi mothers, so intense was the indoctrination programme that the family links were of no effect.

The situation was that bad such that the mass media which serve as catalyst for nation building contributed to the escalation of the violence. A statement credited to Radio Mille Collines at the end of April reads thus: “By 5 May,the country must be completely cleansed of Tutsis. Even the children were targeted: We will not repeat the mistake of 1959. The children must be killed too”. It is alleged that the media directly influenced the Hutu peasants, with a strong conviction that they were under threat, thereby encouraging them to ‘make the Tutsis smaller’ by decapitating them.

Furthermore, allegedly there was no balanced reportage of the massacre by the world press as reviewing headlines in the French and English language press in the first weeks did not capture the massacre in its true picture but presented it as a civil war.Such headlines were ‘Rwanda on fire’, Fierce clashes’,’Slaughter’,’Massacre’, ‘Civil War’, ‘Bloody Horror’,’Rwanda Anarchy’,Fall of Kigali Imminent’, among others.

Unfortunately, the genocide spread in at an astronomical progression to cover the whole the country under the control of the government army, and the estimation is that by the end April there were 100,000 persons killed. Amid this, there was no known effort by the media to draw a distinction between assassinations of specifically targeted Hutus and the systematic elimination of the Tutsis.

For instance, it took not less than three weeks before world- leading media houses in their editorials finally compared the genocide in Rwanda with Germany under Nazism and referring to it as a genocide. The world ‘genocide’ rarely appeared in the main headlines.

In world history, genocides are heralded by warning signals just like the “killer herdsmen” ,”the bandits”are ravaging parts of Nigeria leaving in their trail scores of deaths, rape and maiming.
The irony of the whole episode is that the most appropriate quarters pay lip service to it by branding the vicious killers in a lesser robe or painting the situation in a lighter scale.

Between 1991 and 1994, the signals were very strong in Rwanda and the alarm bells rung intensely. The UN Human Rights Commission even reported some of these signals.Thousands of militia members received arms and military training by the Rwanda Armed Forces (FAR) between 1993 and 1994. The number grew from 5000 to 40,000. This enabled the militias to take on both the Rwandan Patriotic Front (RPF) and internal opposition.

It will be recalled that in 1992 a document allegedly emanating from the FAR headquarters drew the distinction between the principal enemy and their supporters. The first is that:”Tutsis inside the country or outside, extremists and longing to return to power, who never recognised and never will recognise the reality of the 1959 social revolution, when Tutsis were thrown out of power, and would take power back in Rwanda by any means possible, including the use of arms. The second is described as: “Anybody who gives any kind of support to the main enemy” (the Hutu opposition).

Indeed, racist ideologies are evil and should not be supported ,and ethnocentrism as a variant of tribalism sees members of an ethnic group as superior to others. In Germany Hitler’s grand plan was built on intense European anti- semitism which was carried out by singling out Jews as the source of all Germany’s ills. In Rwanda, the Hutu radicals are inheritors of the colonial lunacy of classifying and grading different ethnic groups in a racial hierarchy.

In Nigeria, it is hightime the appropriate quarters confront the situation frontally lest we drifted to anarchy as Rwanda did!

Need for pedestrian bridges across major cities in South East