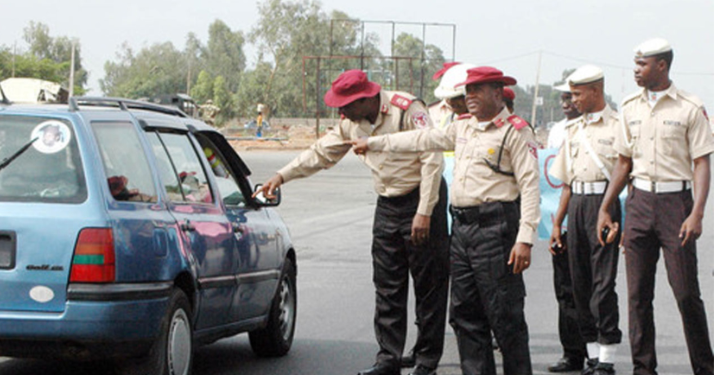 The Committee, chaired by Hon Akin Folarin Mayowa , made the revelation on the floor of the green chambers during a 2020 budget performance and 2021 budget defence .

According to the legislative committee, the need to arm the FRSC became imperative as it would help them curtail the excesses of road users in Nigeria, adding that the 1992 ACT of FRSC empowered the road safety corps to carry guns.

The House Committee Chairman, Mayowa went on to drum support for the recommendation as according to him, being in possession of guns would enable the men function effectively as well as protect them from harms posed including armed robbers ,lawless road users etc.

From the moment the news was aired on broadcast, social and print media, it dominated discussion tables of Nigerians, with many people expressing misgivings over the plan.

If the recommendations of the House are anything to go by, the men of road safety would from 2021, add to the number of military and paramilitary agencies operating with guns in the country.

To be fair to the FRSC, their officials have saved the lives of many accident victims by rushing such victims to hospitals for treatment after they were involved in accidents.

Also, in some instances, some of its officials have either died in the course of duty resulting from attack by fleeing armed robbers while some others were knocked down on highways by some vehicle drivers fleeing from arrest.
However, the move to arm the road safety officials may end up in calamity, thereby messing up every good intention built-in by introduction of arms regime.

This fear is not far-fetched as recent events in the country, caused by flagrant abuse of guns by security agencies has led to extra -judicial killing or maiming of innocent people by some men of the security agencies, many of who got away with their crime unprosecuted.

As the augean stable of brutalities committed by men of dissolved End SARS officials against Nigerians are yet to be cleaned, it would not have been wise for the House Committee to among other begging bills, rush the FRSC bill for President Mohamadu Buhari’s signature.

It is also pertinent to understand that up till present, arms handling and related training have not been part of the activities involved during recruitment exercises by the FRSC officials therefore in this case, throwing arms at the officials to operate without a careful study of the overriding implications may end up creating a situation that would possibly lead to arms abuse which may snowball to another SARS protest.

No matter how golden the recommendations of the House Committee may sound, the arms-bearing bill should be delayed by the upper legislative chamber, the Senate until all sensitive issues raised by critics of the matter are trashed.

This is to avoid a situation where our roads would be turned to a killing field by untrained or drunk officers of the Commission.

Past and recent events involving some overzealous officials of the Commission also point to the fact that they should continue to work without the use of arms.

A little altercation with a private car rider or commercial bus operator could “provoke” an overzealous road safety man to shoot dead a driver, as being perpetrated by some policemen on our roads .

Furthermore, overlap of functions have on several occasions involved men of the Commission in engaging in jobs not carved out for them, for instance, guiding of electoral ballot box during elections or working as environmental officers at Umuahia North council during monthly clean up exercises, which are in contrast with the ACT establishing the FRSC.

Some members of the commission have also been involved in some unprofessional conducts including flagrant bribe taking, formation of illegal road blocks, unapproved highway and inland patrol, etc, and have in some occasions, caused road accidents while chasing vehicle drivers.

High level of unemployment in Nigeria especially among teeming youths have forced many youngsters to enroll into jobs they are not in love with.

And in this case, some officials of FRSC, just like many others in several military and paramilitary agencies do not have the flair for the jobs they are doing, resulting in their misbehavior while in service.

Typical instances: On April 12, 2019, one passenger inside a Micra city taxi died in Moroya area of Ibadan, Oyo State while other passengers sustained deep injuries when the taxi they boarded fell into a deep hole along the road.

The accident was allegedly caused by a Toyota Hilux van belonging to Federal Road Safety Commission which was in hot pursuit of the taxi.

The FRSC van which was marked 1139 was chasing the ill-fated taxi was marked Lagos 831 DH when the taxi plunged into the ditch, leaving in is trail, tears and sorrows.

August 2020 seemed to be another infamous month for the image of the Commission as some of their officials were among 25 men arrested by the Independent Corrupt Practices and other related offences Commission (ICPC) for involvement in driver’s license and vehicle particulars fraud in parts of Lagos.

The fraud, according to the spokesperson of ICPC, Mrs Azuka Ogugua who spoke on Thursday, 27th August 2020, were committed by the Road Safety men in Ikeja, Anthony, Eti Osa and Somolu license centres, in connivance with other suspects drawn from Vehicle Inspection Office (VIO) .

Boboye who said FRSC has 280 formations across the country, explained that the presence of his men are felt in 774 LGAs of the country, adding that the efforts of his officials in ensuring sanity on the roads cannot be overemphasized.

According to him, men of the Federal Road Safety Commission are becoming endangered species while on duty, in the hands of armed robbers, violent and overzealous vehicle drivers.

His words, “70 operatives of FRSC had either been shot dead by armed robbers or knocked down by overzealous drivers, hit- and- run drivers.” “The deaths would have been prevented if the officials were armed”, Corps Marshall, Oyeyemi said.

Also defending his boss, the Spokesman of FRSC, Bisi Kasim, faulted the criticism against the House of Representatives Committee’s recommendations, saying that the Commission was empowered to carry guns.

“The provisions are there in the FRSC Act but the government has to approve it before it can be implemented” said Bisi Kasim. He however explained that only Federal government’s approval would activate the act before his men would hit the roads with guns.

It is pertinent that all concerned stakeholders like road transporters, security experts, leaders of National Union of Road Transporters (NURTW) should arrive at a concord with the gun initiative, before it becomes a law.

Officials of the Commission should first undergo intense trainings and counseling while holistic mental tests should be conducted on the patrol officers to determine their mental stability if they must carry guns at work.

Though, the House of Representatives Committee on FRSC said it would meet with President Muhamadu Buhari and the Secretary to the Government of the Federation (SGF), Mr Boss Mustapha for their advise and approval, sanctity of vehicle drivers and their passengers’ lives should be topmost in consideration, to avoid a situation where FRSC men would see gun as a license to kill and maim, as was perpetrated by the defunct Special Anti-Robbery Squad (SARS) against Nigerians which sparked the recent EndSARS nationwide crises.

All gray areas of this legislative function must be treated before any approval is given for the road safety men to work with guns. At a season when State Judiciary Panels of inquiry are awash with bitter stories of Police and other security agencies alleged brutalities against civilians, Nigerians deserve a breather, and not creation of more crises.

If after all considerations, it is arrived at, there would be no need to approve the gun regime for road safety men, it should then be completely discarded.