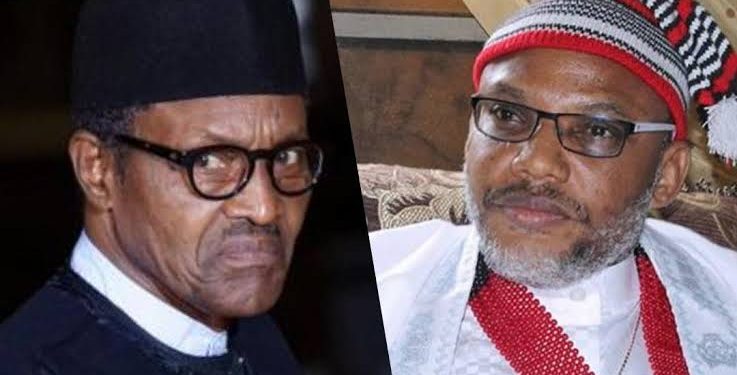 President Muhammadu Buhari has urged the country’s international allies to designate the Nnamdi Kanu-led Indigenous People of Biafra as a terrorist organisation. Buhari made this call in an interview with Bloomberg on Tuesday.

Buhari said terrorists no longer hold any territory in Nigeria unlike what obtained in 2015 when “Boko Haram held territory the size of Belgium within the borders of Nigeria.” The President claimed that He, however, appealed to the Western allies to designate the IPOB as a terrorist organisation.

Buhari added that the leadership of the IPOB “enjoys safe haven in the West, broadcasting hate speech into Nigeria from London, spending millions lobbying members of the US Congress, and freely using international financial networks to arm agitators on the ground.” The President also ruled out bail for the detained leader of the proscribed Indigenous People of Biafra, Nnamdi Kanu. He said Kanu, who is currently on trial, was being given every opportunity under the law “to justify all the uncomplimentary things said against Nigeria while he was in Britain.”

On notions that Kanu was not allowed to see his lawyers privately, the President said the detained separatist is being given every opportunity under the law “to justify all the uncomplimentary things he said against Nigeria while he was in Britain. Reacting in a statement titled ‘IPOB Is A Product Of Injustice’, Ohanaeze spokesperson, Dr Alex Ogbonnia, said that IPOB’s demands are very clear, “treat us as partners in the Nigerian project or allow us to go.” Also, the leadership of IPOB has lashed out at the President over allegations that the group was responsible for pipelines and public facilities’ vandalism in the country. According to the group, Buhari further showed the world his ignorance when he stated that oil facilities, located on the coast of Niger Delta, were vandalised by IPOB. IPOB’s Director of Media and Publicity, Emma Powerful, in an on Wednesday, described the allegation as laughable and childish.

“In 2015, Boko Haram held territory the size of Belgium within the borders of Nigeria. Today they are close to extinct as a military force. The leader of ISWAP was eliminated by a Nigerian Airforce airstrike in March. The jets acquired from the US and intelligence shared by British were not provided to previous administrations and stand as testament to renewed trust re-built between Nigeria and our traditional western allies under my government. “We urge those same international partners to take additional steps costing them nothing, by proscribing another group – IPOB – as a terrorist organisation,” “the leader of ISWAP (Islamic State’s West Africa Province) was eliminated by a Nigerian Airforce airstrike in March,” and other leaders of terrorist organisations in the country were deceased. “He felt very safe in Britain and said awful things against Nigeria. We eventually got him when he stepped out of the United Kingdom, and we sent him to court. Let him defend all that he said there.” ‘Another term for me? No! The first person who tried it didn’t end very well.’

“It is most expedient to enlighten the general public that what IPOB is asking for is the parting words of a Nigerian Titan: the Maitama Sule imperatives to President Buhari when he led the Northern Leaders Forum to congratulate him shortly after his victory in the 2015 general election.”

It reminded the President that Sule had, while congratulating him, admonished that “justice is key to good governance,” and that he should “extend justice to all and sundry, irrespective of religion or tribe.”

“On the other hand, how can one explain the obvious lopsidedness in the appointment of military and paramilitary personnel to head the following organisations with little or no considerations for the people of the South-East region; Nigerian Army, Nigerian Air Force, Nigerian Navy, Nigeria Police Force, Department of State Security, National Intelligence Agency, Nigeria Correctional Service, Nigeria Immigration Service and Nigeria Customs Service; and several others.

“On the other hand, as Maitama Sule predicted the orchestrated alienation of the South-East region from the centre of power as the cause of the agitation in the region.

“The Ohanaeze Ndigbo Worldwide, led by Ambassador Professor George Obiozor, has repeatedly stated that a people denied justice may not have interest in peace.

“The request by Mr President to the West is most unachievable because the West watches with keen interest and utter resignation the pathetic governance paradigm in the country.

For the avoidance of doubt, democracy all over the world requires justice, equity, mutual toleration and institutional forbearance, all of which are in short supply in the country today.”

“The President should tell America and other Western countries the locations of pipelines IPOB vandalised. The allegation against IPOB by Buhari is childish because everybody knows that IPOB does not engage in pipeline vandalism. Even the international community knows that IPOB is not involved in such acts.

“Going to Bloomberg news and parroting falsehoods against IPOB won’t save him and his co-travelers from being prosecuted in the International Criminal Court at the appropriate time.”