I’ll take Anambra out of darkness, for we are the ‘Light of the Nation’ – Etiaba 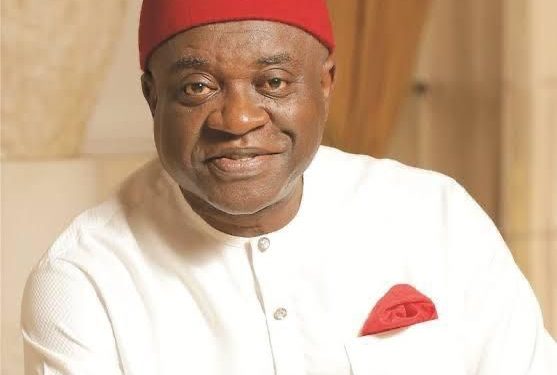 Ben Etiaba FCA, was the Chairman of the Institute of Chartered Accountants of Nigeri,a United Kingdom District from 2002 to 2004. Following his qualification as a Chartered Accountant in England, he worked with Thames Valley Services Ltd., rising to the position of Director of Admin and Finance before leaving them to cut his teeth in professional practice.

He was a former Partner of Delbau & Co Chartered Certified Accountants, Management Consultants and Registered Auditors. He was a former Chairman of The London Group (Nigeria’s Professional Leaders in UK) from 2005 to 2007. Currently, Principal Partner of Ben Etiaba & Co, Chartered Certified Accountants and Management Consultants.

Chief Etiaba who is also a member of the Financial Reporting Council of Nigeria, currently holds the following Board positions; Chairman, Havila Suites Ltd, Chairman, Gallery Publishers Ltd., Chairman, Aquila Board Audit Committee, Director, Aquila Leasing Ltd, and Director, Aquila Capital Ltd. and has won several local and international awards, including; Natwest Bank sponsored ‘African Business Partners’ award in London for ‘Business Innovation’ (1998), and Award for Excellence’ (2003) at ‘The Gathering of Africa’s Best in London’.
With over thirty years of professional experience in industry and practice, he is married with three children and outside the office his passions are his State, family, golf and tennis.

A stickler for professional excellence, he is one man who has built his practice through a character and style of nursing the growth of his clients’ businesses towards their full potential, in this exclusive interview with our correspondent, Uchenna Ezeadigwe, he explains why he is in the race as well as his aspirations to make Anambra a better state.

How would you describe yourself and your intention to run for the governorship election?

I feel that virtually all the problems we have are man-made due to bad leadership and if we can elect the right leaders, then we can solve these problems. I am offering myself because I believe that I can think differently, I can act differently.

There is a saying that, if you keep doing the same thing over and over again the result will be the same but if you decide to go in different direction the result you will achieve may surprise you and I think it’s time for the result to pleasantly surprise Ndi Anambra by electing the right person as governor.

You contested your primaries under the platform of APC, what really made you leave for AA party than supporting the party?

You know what happened in APC and so for me to begin to comment on that will be like sour grapes. That matter is in court and anything I say about it should be sub judicial to the case in court, so I rather not make a comment especially as I have left APC.

I bear no ill to my former party APC and I am grateful for having given me the platform to ventilate my aspirations for two and half years. I left for Action Alliance because am running for governor, I was not in APC for minister, or contract or ambassador but to be governor if my people so choose me. So if I am to remain in APC, I have to move to a great platform Action Alliance and I am happy to be the flag bearer in this coming election and by His grace, I believe the party will win the election.

You chose a female candidate as your running mate, what really informed that choice?

All through my campaign, I have decided to choose a woman as my running mate and I went on to say that, we will have 40 percent of women in my administration if I win rather than the 35 percent that has been advocated. The reason why I chose a woman apart from who I am and over the years, having seen the virtues of womanhood, it will not make sense that the son of the first female governor in Nigeria and the only female governor in Nigeria will run a male-male ticket and not choose a female running mate. I can never explain that to the women of Nigeria and women of Anambra state, it won’t make sense. It’s like moving backwards.

So the woman I have is not just any other woman but a great woman in politics who has grounded knowledge in grassroots politics, a great mobilizer from Anambra West, a graduate of Business Administration from Rivers State University of Science and Technology, also a business woman.

She is someone who understands what these things are all about. She has been married for thirty years. She is only forty nine years and a grandmother.

Mrs Uchebo is well accomplished and I am happy and delighted to the values she has added since she joined me. So I am just living up to my promise with women in Anambra state that I will partner with them to change the cause of our dear state.

And of course, there are so many issues affecting the women, you cannot cry more than the bereaved. It is the women that will tell you what their problems are and they will help you to find the solution. Mine is to have the will to implement the solutions to the problems women and girls are facing in the state and I want to tackle those head on.

Do you have an experience in politics and how do you intend to strive among those power driven politicians?

Yes, but not in partisan politics. Pretty everything in life is politics ranging from societal to family issues. I am 57 and I have been leading from the age of 27, so I have been in politics for thirty years.

Hence the things we see as being important in politics are not necessarily important. Those important ones are the ones our politicians seem not to be addressing and that is what I am here to do.

While they are busy doing those thing they address traditionally, I will go behind them and do the things that will win the election.

We will win this election by His grace but its God that gives power too. If God says it’s me then that doesn’t matter how many billions they have or how long they have been in power.

Money doesn’t win election if it does, then we would have a billionaire every four years as governor.

Some Ndi Anambra believe that its time for the Anambra South senatorial zone to rule the state, what can you say about that?

Zoning is not part of the constitution, it’s not in any policy document of the state. It is just a mere understanding for equity – let us respect one another because if you fail to do so, a particular zone may retain the governorship for eternity.

Take for example, Anambra south, that’s where I came from.

I don’t think it’s difficult to convince you that it is a very strong zone politically and financially. So what if you say winner takes all or kind of survival of the fittest then it might remain in the south for so many years and that is not good for us as a state.

By moving it around you have the opportunity to deliver other zones.

You find out that some governors will go about developing some section of their zone, but Ben Etiaba will develop the state and not his place alone. At the end of the day, it’s all about the candidate, if you have an exceptional candidate from a different zone and the electorates decided to elect him, why not?

If you happen to see yourself at the Governor come November 6, what do you have for Ndi Anambra?

Assurances can only come from God. Mine is just to make a promise. If I am lucky to be elected as Governor, I will be a servant. I have a hero and mentor that I will always want to emulate and that’s late Mr. M.I Okpara.

I will do more than M.I Opkara did and that will be my wish, my promise, my target and I believe God will help me to fulfill that promise to Ndi Anambra.