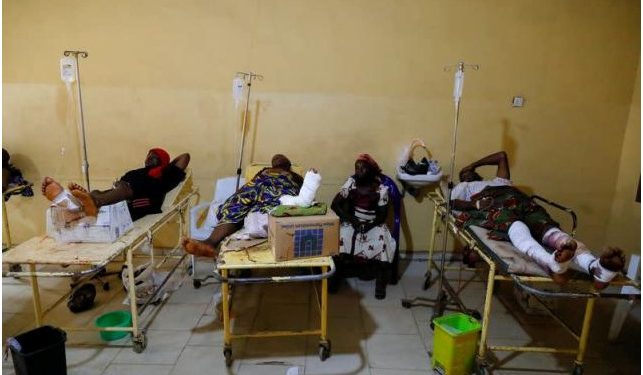 Some victims of the Owo church attack on their hospital beds

A visit to the Federal Medical Centre, Owo and St Louis’ Catholic Hospital, Owo where the victims who sustained injuries are receiving medical treatment showed that more victims had died. It was learnt that no fewer than 10 victims who were rushed to the hospital died between Sunday night and Monday morning.

Bishop, Catholic diocese of Ondo, Bishop Jude Arogundade, confirmed that some other victims have died.
He did not give accurate figure or the casualties. “We are still counting the number of the victims involved in the incident. Some people died between Sunday night and Monday morning. We’re mourning in Ondo Diocese. What happened in Owo was unexpected and unfortunate.”

The Nigeria Medical Association (NMA) had earlier appealed to well spirited people, saying many of the victims were in dire need of blood. It was learnt that some victims of the attack who are recuperating are in need of blood.

Bishop Arogundade said Federal Government was not doing enough to curb insecurity in the country.
He urged the governors to ensure that those behind the killing and their sponsors were brought to book.

He said the church where the incident happened was one of the biggest parishes of the Catholic Church in Ondo State with 1,200 seater capacity.
Workers of the Federal Medical Centre and Saint Louis Hospital where the dead and the injured were taken to said 35 people were brought in dead.