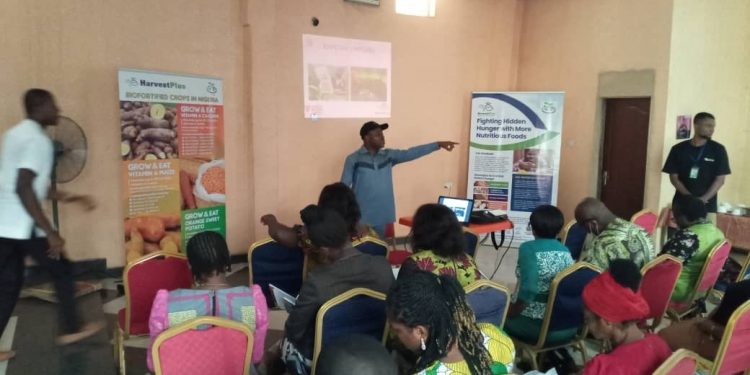 In ensuring that people remain healthy, the Program Manager, Commercialization of Biofortified Crops project, Mr. Goodluck Ogu has called on farmers and households in Imo State to make taking nutritious foods a culture.
Speaking during the Imo State high level biofortification stakeholders meeting held at Eastern Emirates Hotel, Owerri, Ogu noted that food is culture, adding that in doing that nutritious foods must be taken for healthy living.

He hinted that the responsibility of the stakeholders in farmers’ value addition chain is to ensure that they remain focused and together to achieve the efforts of bringing everyone to taking biofortified foods and also plant them and for commercialization purposes. He noted that the world has moved from food security to nutrition security where whatever one takes, one must be sure that there’s high content of nutrition, stressing that the stakeholders should be involved in hunger management in Imo because according to him, hunger is real. He encouraged the participants to make visible what they do at various levels of the food chain so that the world will know what Imo is doing in terms of propagating the consumption of nutritious foods and commercialization.

Goodluck Ogu revealed that in 2022, Imo state should work to host the Nutrition Food Fair (NFF) which will bring local, national and international participants in agriculture to Imo, adding that the multiplier effects on the impact and economy of Imo State will be massive.
Ogu hinted that if the farmers in Imo State organize themselves and work as team, the NFF will create over 1000 jobs along farmers food chain through the job clinic. He talked about nutrition quiz for secondary school students, free exhibition for all farmers, Smart mothers, campus beauty pageant in nutrition, among other activities that will put Imo on the global light and network.

Mr. Goodluck Ogu noted that the essence of the meeting was for the stakeholders to buy-in and push for consumption of biofortified foods in the state and for the State to build Programs that will ensure adequate biofortification in the system.

He posited that the relevance of the meeting was to ensure that there’s processing activities, empowerment through training, product presentation tht would come out of it which could be showcased at Nutrition Food Fair (NFF).
He urged the state government, ADP, ministry of health, farmers organizations, desk officers, relevant MDAs, institutions in the state to work to realize the project of making Imo host next year’s Nutrition Food Fair (NFF).

Ogu encouraged participants as key stakeholders work towards having a CBC food fair/a preplanting season awareness day come February 2022. He suggested that the event can be used to showcase the biofortified crops grown and processed from different LGAs of the state, adding that the event will help of Imo processors access their ability to host the 2022 Nutrition Food Fair.

In his remarks, the CBC project partner and Program Director, Foundation for Livelihood Advancement (FLA), Elder Kenneth Amogu asked the farmers to continue to propagate and biofortify their communities so that the consumption of nutritious foods and commercialization will be achieved in Imo. He charged the participants to take home what they have learned and continue to work to achieve nutrition value for households in Imo State.

In their various contributions, Special Adviser, Agric and Policy Implementation to the governor of Imo, Rt. Hon I.E. Jones Uzoka, SA, Culture and Tourism Development, Rt. Hon. Nkem Nwankwo and Permanent Secretary Ministry of Agriculture, Mrs. Sabina Onuchu applauded CBC for the stakeholders meeting and promised to support any action that will ensure that the citizens of Imo begin to take the consumption of biofortified foods seriously.

They also said the NFF 2022 will be welcome development while calling on everyone to key behind the success of the event.
Earlier, Prof. Abraham Ngwuta of The Center for Agricultural Research and Extension, FUTO and Prof. Mrs. Ngozi Onuegbu of Food and Nutrition Department, FUTO noted that there’s need to increase the awareness on the consumption of biofortified foods in the state, stressing that everyone should begin to do something visible from their end for complete knowledge of the importance of taking biofortified foods in the state.

FAMILY CIRCLE: THE SEASON OF LAUGHTER

Echoes of Culture : Another round of political service begins for Senator Samuel Nnaemeka Anyanwu

Echoes of Culture : Another round of political service begins for Senator Samuel Nnaemeka Anyanwu

Dusan Vlahovic: Juventus close in on signing of Serbia striker from Serie A rivals Fiorentina