Ohanaeze: Standing up for Ndigbo, speaking truth to power 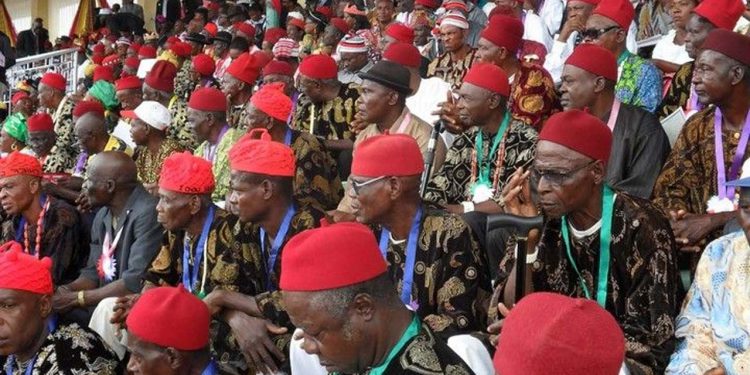 The pan Igbo socio- cultural organization, Ohanaeze Ndigbo Worldwide, headed by Prof George Obiozor, has taken critical position against the federal government of Nigeria who it seriously warned not to fail to produce the detained leader of the Indigenous People of Biafra (IPOB), Mazi Nnamdi Kanu, in court at Abuja on October 21.

Regrettably, the Supreme Leader of IPOB, Mazi Nnamdi Kanu, was earlier this year arrested in Kenya by the Department of State Security (DSS) with the co-operation and support of Kenyan officials who blew the whistle against him

He was dumped at the DSS custody by the Federal High Court order having been accused of 11 count charges of treason, treasonable felony, terrorism and illegal possession of fire arms among others.

The DSS was unable to bring him to court to face trial as the court demanded for the second time since his arrest and detention. His continued incarceration in the DSS underground custody has raised dust by IPOB, its sympathizers and proponents of freedom and democracy who are wary of his health status.

Thus, Ohanaeze Ndigbo had threatened the federal government to bring Nnamdi Kanu to court on October 21 or the gubernatorial election of Anambra State billed to hold November 6 this year may be put to a halt. The group had just reechoed the threat and warning by IPOB that if the federal government and the DSS fail to bring Nnamdi Kanu to court on the fixed date there is going to be one month sit-at-home in all the five states of South East.

This is not a mere threat. Because the people of South East who have been calling for the unconditional release of MNK and other detained IPOB members had said they are hundred percent ready to comply with the IPOB directive of one month sit-at-home should the federal government act funny.

By this position critically taken, Prof George Obiozor’s led Ohanaeze Ndigbo, is beginning to win the hearts of the Igbo and their allies by standing tall against atrocities being meted out to the Igbo by the federal government of Nigeria- who the group accused of highhandedness, hatred, marginalization and shortchanging in terms of leadership positions, economic control and political appointments – which they regretted got worse in the present regime led by APC and President Muhammadu Buhari.

The group in a statement signed and made available to the public by its Secretary-General, Okechukwu Isiguzoro in Abakaliki, the capital of Ebonyi State, last week, flayed the South East Governors for being wicked, selfish, ungodly, greedy, incompetent, and dormant and lilly- livered. Hence their inability to take bold steps to compel the federal government and the DSS to release MNK and other detained IPOB members, as well as developing the region and making lives more meaningful for their citizens.

Without mincing words, Ohanaeze Ndigbo had sounded it to the ears of the world especially those who believe in human liberty, rights, freedom and legitimacy that the federal government of Nigeria and her security agencies are working to wipe out the entire Igbo race due to IPOB’s demand for freedom and self- rule which it stressed manifested in incessant military carnage in the region, sheer exclusion from the government of the APC and Buhari led federal administration, serial killings, maiming and adoption of people by Fulani herders terrorists.

According to Ohanaeze Ndigbo, “we are ashamed to admit that some of the South-East governors are now spokesmen for the Presidential Villa. Their public postures and assertions depicted cajolery to the traditional norms and cultural heritage of what Igbo is known for.

“We are embarrassed by the way these governors grant interviews without any consideration of the negative impacts and consequences of their utterances to the public. These shows of shame must end instantly. We are disgusted by the discovery through the governor of Anambra, Willie Obiano- that President Muhammadu Buhari is not in the know or approved of the presidential threats to declare a state of emergency in Anambra State”.

The group maintained that “our suspicion is reinforced by these findings. There are also the possibilities that Buhari is not aware of the wavering in the arraignment of Nnamdi Kanu in court and the office of Attorney General should dispute the facts that the office had not been hijacked for rogue operations against the South-East”

Ohaneze Ndigbo has clearly warned that “if the federal government fails to produce Nnamdi Kanu in court on October 21, 2021, subsequently, it will be a breeding ground for various reasons Anambra elections might be marred with irregularities and violence”.

Despite the fact that governors of the South East especially governor Hope Uzodimma played big roles that brought Prof Amb George Obiozor as the President-General of Ohanaeze Ndigbo, the group is really demonstrating patriotism for Igbo race. For representing the tribe well, the people have started reposing their confidence in its ability, capacity and efficacy to keep Igbo race afloat and peaceful.

Hitherto, not many believe that the Ohanaeze leadership had the courage and boldness to stand up to speak truth to power. This is in the light of the fact that the group’s activities is sponsored by the South East governor’s who have been lily-livered and proven themselves as stooges of the northern oligarch.

They kept sealed leaps and clandestinely worked towards the declaration of the IPOB as terrorist organization. They are not known to seek for justice in the various killings of Igbo youths. Okezie Ikpeazu and Ifeanyi Ugwuanyi of Abia and Enugu States respectively never bother for a probe panel when 28 boys and 30 youths were sent to their untimely death at Afara Ukwu, Umuahia and Enugu in 2019 and 2019 respectively.

Gov. Hope Uzodimma boastfully invited the military to confront those he labeled hoodlums and ever since Imo has never known peace with many youths killed

Ohanaeze standing up to defend ndigbo and calling a spade a spade merits News Echo award of Man in the news.