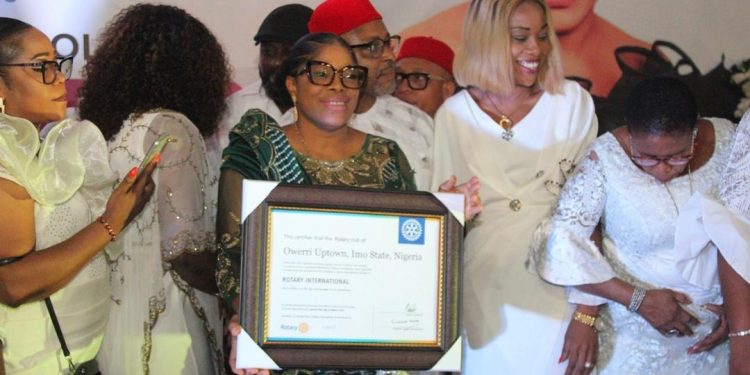 THE newly installed President of Rotary Club of Owerri Uptown, Mrs Olaedo Ike-Godson, has vow to do her best in ensuring that the humanitarian job the club is out to do succeeds in all ramifications.

Among the projects to donate include four-room toilet facility with water source and generating set to a girl-secondary school in Imo. Ike-Godson made the promise during her installation in Owerri the Imo state capital.

She promised to carry out sensitisation on the various variants of the hepatitis diseases, screening against blood sugar as well as distribute insecticide treated mosquito nets.

According to her, “we will organize seminars and workshop on peace and conflict prevention for youths in the municipal.

“We plan to carry out cervical cancer and breast cancer screening”.

She said scholarship would be awarded to an under privileged but brilliant student in examination class, covering tuition, WAEC fees and books.

“Extensive economic tree planting to encourage afforestation at erosion prone areas within the municipal will be carried out,” she said.

Ike-Godson said within her one year in office, she would erect two bill boards for advocacy and crusade against drug abuse and election violence.

She added that five widows would benefit N100,000 each as business capital start-up, while three entrepreneurs would receive a sewing machine each.

“Donation of exercise books and school bags and shoes to pupils in a primary school would be made,” she added.

Ike-Godson solicited the support and solidarity of board members and fellow Rotarians, to achieve her goals.

“There are lots of under-privileged and needy persons in our communities and the world at large, whose only hope will come from us and our friends.

“I urge us to decide here and now to make their lives better in any way that we can,” Olaedo stressed.