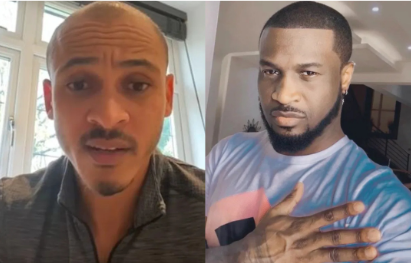 Nigerian singer Peter Okoye and retired footballer Peter Odemwingie have both taken to social media to tender a note of apology following a recent exchange between them on social media.

The drama started after the footballer called out the singer for encouraging gambling in the country with his sports betting company.

However, Peter did not take too kindly to the ex-footballer’s actions and he made sure to call him out on social media.

Well, following the ugly episode, Odemwingie returned to his page on Instagram with a lengthy video in which he gave a full explanation of what really happened and how he never intended to offend Peter with his actions.

Odemwingie, however, still maintained that the singer is encouraging betting in the country with his lottery business, which is not entirely so good. “Piroooo Bro na you sing am oh. Baba God na your handwork. I clear some issues for our people.

Careful with gambling cos we don’t see what happens behind the scenes when people lose money or borrow to play. God bless Nigeria.”

Reacting, Peter also returned to his Instastory channel noting that he has accepted Odemwingie’s apology. He also apologized for dragging the footballer on social media.

What Drives Your Long Term Business Success? – Study Macro Trends to Find Out