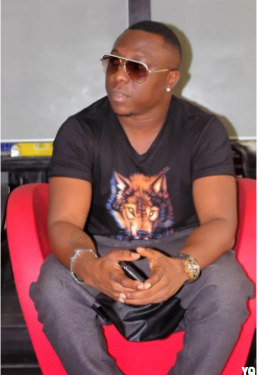 Nigerian singer Yakubu Jubril popularly known as YQ has refuted claims that he was kicked out of his apartment by his girlfriend over the inability to pay his rent.

In a video that was released earlier, YQ was seen getting evicted from a house by an unidentified lady.
The music star who now resides in the United States of America while reacting to the report via his Instagram page on Wednesday, October 28, 2020, said he only left the lady because he was avoiding domestic abuse.

“I won’t say or post anything further to break anyone._I only ran from abuse and domestic violence because I swore to never lay my hand on a woman. MAKE UNA DE FLEX DE GO. 😉 _SHAIIZI,” he wrote.

YQ’s post is coming hours after a lady with the Instagram handle @tha_baddestbaldie posted a video where the ‘I Like Girls’ hitmaker is seen getting evicted from an apartment.

“Please tell YQ to run me my money. I’m his ex-girlfriend and he never pays or pays late. I’m sick and tired of his mess,” she captioned the video.

YQ started his music career in 2002 when he formed a group called Q-krest. He started his solo career in 2007.
He has several hit songs to his credit including Efimile ft Dagrin, I Like Girls, Dresscode and Sandalili.