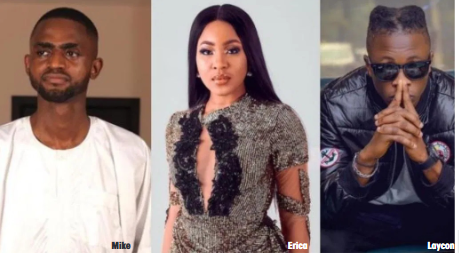 The feud between former Big Brother Naija (BBNaija) housemates Laycon and Erica does not seem to be going away anytime soon as indicated by a recent happening in the online community. Laycon in an interview clip which is currently being circulated online fielded a couple of questions and was also asked to say something about Erica.

The BBNaija winner while responding to the question described his fellow ex-housemate with a host of flattering words and also made it clear that he wishes her the best. Laycon described Erica as an amazing and wonderful person among other things. However, the video does not seem to go down well with Erica’s fans as many of them have taken to social media to express their reservations.

A user identified as @donmikeone, who is also Erica’s manager, accused Laycon of never trying to personally reach out to her even though they are both on the same WhatsApp group. According to him, Laycon’s action is a PR stunt and people should not fall for it.

I respect Rohr’s decision to put me on standby – Onuachu