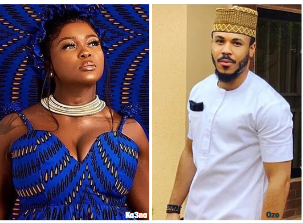 BBNaija star Ka3na has left tongues wagging when she unfollowed ex-housemate Ozo on Instagram. The reality TV stars used to be very good friends while they were in the house. However, a few days ago, it was discovered that Ka3na had unfollowed the handsome young man on social media.

A few months ago, after Ozo was evicted from the BBNaija show, he told the show’s host Ebuka that he knew he was stupid in his pursuit of Nengi’s love. Reacting to the statement,

Ka3na noted that she was shocked by his eviction. She, however, added that Ozo was indeed aware that he played stupid all along.

Although the young man did not react to his fellow housemate’s statement, it is surprising why Ka3na unfollowed him.

BBNaija: We are scared of you — Erica's fan