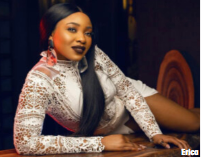 BBNaija Lockdown star Erica Nlewedim recently engaged her fans and followers in a conversation on social media. In a simple tweet, the reality TV star asked her followers why they are scared of her.

A fan called Racheal replied and said Erica once stated that her followers annoy her. According to her, since she made that statement, they have been walking on eggshells as they do not want to annoy her.

Reacting to Racheal’s statement, the Lockdown star noted that some of her followers tend to go overboard as they try to enforce their opinions on her.

Erica revealed that these followers even come to her DM to insult her when she does not do things in their own way.

According to her, she feels like she is walking on eggshells with her followers. She went on to note that she only blocks the people who insult her.

The disqualified ex-housemate stated that people do not have to agree with her but they should not insult her.

Mass Communication And The Modern Society