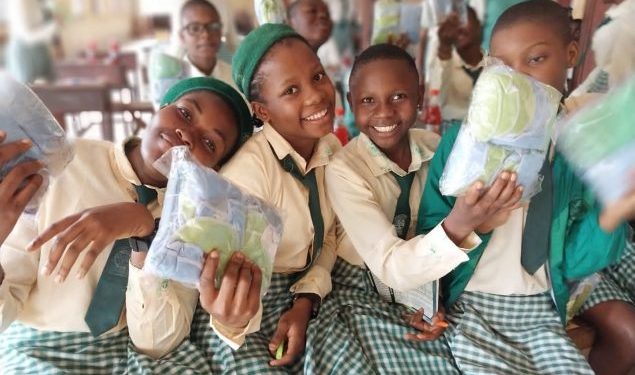 About 120 female students of Michael Okpara University of Agriculture Demonstration School, Umudike, Abia State have received reusable sanitary pads from Rotary Club of Umudike Central. The items were donated by the Synergizer President of the Rotary Club Umudike Central, Rtn Chinwe Vivian Anyaegbu who said donations were made in partnership with North Cobb Rotary Club, Atlanta, USA. Rtn Anyaegbu who said that the gesture was part of Rotary Club international’s efforts at promoting good mensural health among young girls in the society.

She stressed the importance of menstrual hygiene among the teenage school girls and warned the beneficiaries against the use of any unhealthy material when observing their menstrual periods. The Synergizer Rotary President assured that her club would continue to embark on life enhancing programs.

Responding on behalf of other students, Miss Kelechi Okezie, Miss Favour Uzokwe among others, thanked Rotary Club of Umudike Central for caring for the health of the students. Similarly, 10 petty traders in Umuahia have been empowerment with N200, 000 by new President of Rotary Club of Umuahia main, Rtn Adaeze Iroegbu. The President in explaining the reason for the N200, 000 donation, said it was aimed at providing stepping stones for the traders. She however, warned the traders against misusing the money on frivolities.