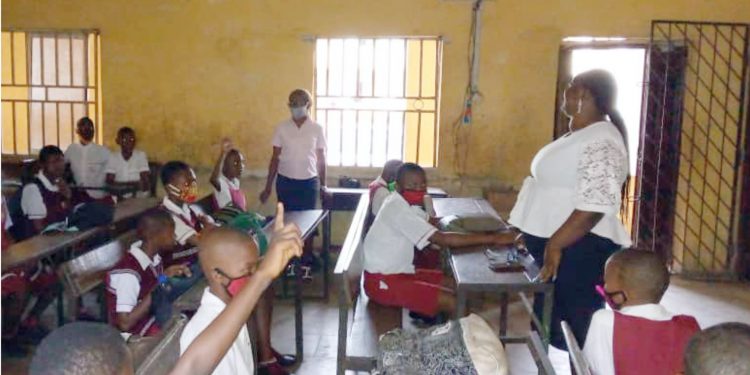 0
SHARES
116
VIEWS
Share on FacebookShare on TwitterShare on Linkedin

In keeping with our social responsibility to the society, News Echo took time to monitor the progress of schools resumption as suddenly announced by the Imo State government. This was after the Coronavirus instigated the unplanned forced vacation of six months. The government had earlier announced resumption Monday. Our correspondent, on Tuesday 6 October, went round some of the schools to ascertain compliance with government’s directive for the resumption.

In all the schools visited, it was observed that academic activities have resumed in earnest, though at varying degrees. While some pupils and students, probably persuaded by their parents and guardians saw the urgent need to resume school immediately, having lost much grounds in their academic pursuit, others stuck to their guns and are likely maintaining their policy of taking one week off at every official schools resumption date. It was also observed that Covid-19 protocols were being observed, though not 100 percent.

The Principal of Handmaid Girl’s Secondary School, Area G New Owerri was skeptical about speaking to journalists concerning the school, without prior information and permission from the Owerri Archdiocesan Education Commission. She however disclosed that all Covid-19 protocols were being strictly observed.

Reverend Sister Udeh informed News Echo that the school resumed since 27 September, when the archdiocese directed all Catholic mission schools in the state to resume, even as the JSS3 students resumed three weeks earlier, preparatory for their junior WAEC examination.

Fielding questions from our reporter, Principal, senior section of Comprehensive Secondary School, Douglas Road, Owerri, Mr Benedict Ezem, informed that the school resumed in earnest, in line with government directive, adding that the Covid-19 protocols were being strictly observed. He said that a good number of students have gladly returned to school, especially in the junior classes where teaching and learning was going on in earnest, in line with government directive for junior classes (JSS 1&2).

They were directed to come to school on Mondays and Tuesdays while JSS 3, SS1& SS2 take their turns on Wednesdays, Thursdays and Fridays, all in a bid to have more classes to maintain social distancing. He expressed optimism that the senior classes will resume in earnest the following day (Wednesday) in line with the arrangement.

In his own submission, the Principal of the junior section, Mr Nelson Oparaugo informed that they were observing all Covid-19 preventive measures; wearing of face masks, provision of hand washing buckets, use of hand sanitizers, use of temperature gauge and maintenance of appropriate spacing in classrooms.

He added that government had earlier provided a sick bay to handle any emergency occurrence as regards to Covid-19 and took our correspondent round to observe ongoing teaching and learning in JSS 1&2 classes.

Some students of the school who spoke to our correspondent; Chima Ndubuisi (JSS 1 B) Chisom Obianuju (JSS 1 A), Emenike Divine (JSS2 F) and Uwanaka Godswill (JSS2 A&B), all expressed happiness at the school resumption and urged government to equip their school with all necessary facilities that could enhance teaching and learning and for proper Covid-19 preventive measures.

At the Emmanuel College Owerri, only a handful of students were seen around without any academic activity going on.

The Principal senior secondary section of the school, when confronted with the question of lack of activity, said students were allowed to go, after getting tired from strenuous work of clearing the heaps of feces littered all around the classrooms in the school by miscreants who converted the classrooms to toilets, due to lack of perimeter fencing round the school.

Responding to questions from our correspondent, the School Supervisor of Glorious International School (Creche, Nursery, Grades and Secondary) Eunice Udeogu said the school authority passed circular to parents on getting the announcement from government for schools to resume on 5 October. She said the turn up on on Tuesday, being the second day of schools resumption was higher than the first day because those who came the first day went home and spread the good news that academic activities started immediately and that everything were put in place to ensure their safety.

“We longed for the school resumption for a very long time and when parents, pupils and students heard the news, honestly, they received it with joy. As for the Covid-19 protocols, we are strictly adhering to it, including fumigation of the school compound because we wouldn’t want to put our pupils, students and parents to risk,” she stated further

At the City Primary School, Owerri, the two headmistresses of the two schools; Mrs Njoku Elizabeth, headmistress of Development Primary School 2 and Mrs Okoro Justina, Assistant headmistress, Township Primary school, disclosed that they have resumed, in line with government directive, though students have not fully returned back to school.

However, some of the teachers who spoke to our correspondent under the condition of anonymity said school has resumed but they were bleeding in their hearts, having not received salaries for seven months, while those who have received their salaries were cut almost into two.

They all expressed joy at the resumption of schools, and said they have been strictly adhering to all Covid-19 protocols and directives from government, while calling on government to extend the covid-19 preventive facilities and palliative to them.