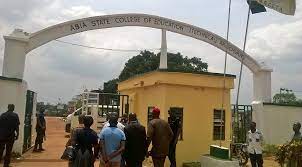 The general knowledge everyone had about higher schools (education institutions) be it university, polytechnic, college of education whatever, that it is an institution of higher education and research which awards academic degrees in several academic disciplines after completion of studies at stipulated time.

However, Abia State College of Education, Technical Arochukwu (ASCETA), students whose official stay in school ended five years ago (2017) are yet to see their results not to talk of a certificate that will enable them to go for the compulsory one year National Youth Service Corps (NYSC).

The affected students who are in their hundreds are crying, weeping and pleading with Abia State Governor, Dr. Okezie Ikpeazu, education authorities in Nigeria and human rights activists to intervene and save them from hardship.

The students told News Echo that after they were made to pay every necessary fee and done with their clearances, five years after, ASCETA management has failed to give them their results not to talk of mobilizing them for the NYSC.

Some of the students who spoke to News Echo anonymously for fear of victimization said that the problem they have is because ASCETA has failed to pay some necessary fees to Abia State University, Uturu (ABSU) whom they have a Memorandum of Understanding (MOU) with on degree affiliation programme.

One of the victims said, “I have graduated for five years now, I have not had my result because ASCETA has refused to keep to the agreement they had with the Abia State University, Uturu (ABSU).

“They reached a memorandum when the degree programme started running in 2009 that a particular percentage of our school fees will be paid to ABSU while ABSU will be responsible towards issuing us our results and mobilizing us for NYSC.

“However, since the present management of ASCETA took over, they’ve not paid any percentage to ABSU. That made ABSU stop issuing our certificate and also put an end to any form of mobilizing us for NYSC even though we’ve paid all necessary fees as students at ACETA and we have even done our clearance.

“Every year, they graduate students and dump them at home not minding that we need our certificate to get jobs to help our poor parents that saw us through school under hardship.

“Out of these frustrations, a set that graduated three years ago came back to ASCETA pleaded with them to at least move their results to ABSU so that they can take the responsibility of paying that particular percentage ABSU is asking for since that’s the main problem.

“ASCETA did as they pleaded and those students went to ABSU, paid for fees they’ve already paid for initially to ACETA and that was how they got their certificates after two years of graduation. That was also how they were mobilized for NYSC.

“However, before anyone could know it, ASCETA management went on air and started singing their praises on how they cleared them and mobilized them. Please, we’re begging Abia State Governor and every other relevant authority in this state and country to please come to our rescue,” One of the victims said.

The Provost of ASCETA, Philip Ntoo said he inherited the problem from his predecessor and stressed that he had gone ahead to solve part of the problem.

Ntoo said that when he took over, he went to ABSU and they told him that the previous people managing the institution did not remit the agreed fund to them.

The Provost said that his administration borrowed money and paid the much they could afford which allowed some of the then affected students to be cleared and had the opportunity to go for their service while some are still outstanding.

According to Ntoo, “The payment is as we get because they didn’t pay to me. They paid to the people I took over from. You know the institution has been struggling to meet up with financial challenges and this their own is one of them.

“The place must run and we’ve been struggling to ensure that various aspects of the institution run favourably so that we’ll continue to put out graduates.”

The Provost however alleged that most of the people who spoke to journalists on their predicament are the architects of their problems as they have not fulfilled the required condition that is necessary for one to call themselves graduates of ASCETA or ABSU.

Explaining what he meant, Ntoo said, “The first condition is that you must conclude your NCE programme which most of them are yet to comply with. After that, they can go ahead to do their degree.

“We have evidence that most of them have not fulfilled requirements for NCE, have not done the clearance that will also authorize ABSU that these people should be issued with a certificate.

“I know they attended University, but after that, you must clear with the institution and they’ll allow you to go with their degree. Most of them have refused to do the needful, but are busy mounting pressure that they must be allowed to go.

“I have a name to protect and there are things I’ll not accept because the requirements must be gotten. They know the conditions and they should go and fulfil them. There are stages and things that must be done before another and these are their major problems.

“They must complete their NCE programme and then apply for Direct Entry through JAMB. Then ABSU will recommend them and give them provisional admission because they must present their NCE to get cleared.

“What most of them did was to jump into the degree programmes without fulfilling the provisions required to get their NCE which is the result that will qualify them to begin a degree programme and take their admission away from provisional admission to the main admission.

“This is the problem some of them are having and they’re among those making noise. I believe in due process. They must fulfil every necessary step. I’ve given an order that names of those affected in this thing should be published so that the general public will know.”

However, the students who spoke to News Echo refuted Ntoo’s position that some of them are the architects of their problems, stressing that they did everything necessary only for the school management to abandon them.

One of the affected students who told News Echo that she has missed many job opportunities because she has no result and has not gone for the compulsory NYSC, described the school management as a liar.

She added that the current Provost of ASCETA, Philip Ntoo told them that the debt the previous provosts were owing ABSU was too much that he cannot pay all and assured them the situation will be handled, but no positive result from him yet.

She said that against Ntoo’s statement, the majority of them joined ASCETA as NCE students in 2011 because they knew ASCETA were in affiliation with ABSU for a degree programme that started in 2009.

She said that they saw this same challenge they are facing now under the previous administration that handed over the current one and their investigation showed that ASCETA management does not usually pay their part of the agreement reached with ABSU.

She explained that the previous payment Ntoo said he made to ABSU to enable some students to get cleared to serve was never true as the students were forced to pay different amounts of money to the management to enable them to clear them, give them results and mobilize them for NYSC.

“Previous students who succeeded to get their results were forced to pay double fees because they’ll pay in ASCETA and also pay in ABSU.

“I have never seen such before. After our NCE programme in 2014, we started our degree programmes and graduated in 2017, but up to date, I’m still being referred to as a student because of the wickedness of ASCETA management.

Another victim told News Echo that ASCETA management led by Philip Ntoo tactically abandoned them and the existing affiliation with ABSU and formed a new affiliation with Michael Okpara University, Umudike (MOUAU) leaving them to terrible fates.

He said, “We concluded our NCE and did everything right. The only thing the Philip Ntoo administration did was to hurriedly form another affiliation with Michael Okpara University of Agriculture, Umudike and abandoned us.

“We’ve paid fees, did clearance and nothing has been done. They told us that if we can do clearance they’ll solve our problems and I did mine with N109, 000 till now I have no certificate to show that I went to school. The last time I went there, they were still lying.”

When contacted to know their position on the matter, the Public Relations Officer of ABSU, Chijioke Nwogu confirmed the students’ positions that some payments due to ABSU has not been made which is the reason behind the delay in clearing the students.

He said that the same rule applies to all students, including affiliate institutions, stressing that the ASCETA students who are affiliated to ABSU ought to have paid their school fees, register their courses online, so they can take your exam.

There can’t be peace without justice – Ex NANS Boss